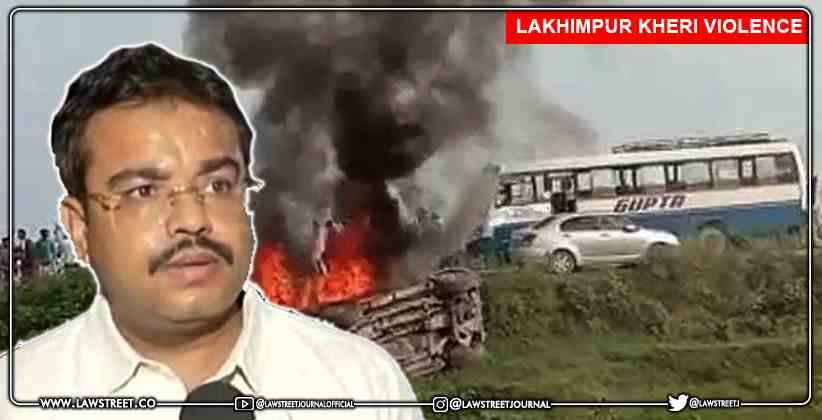 A First Information Report (FIR) has been filed against Ashish Mishra alias Monu, the son of Union Minister of State for Home Affairs and BJP MP Ajay Kumar Mishra 'Teni,' in connection with the recent violent incident of Lakhimpur Kheri, in which eight people died, four of whom were mowed down by a vehicle allegedly driven by Mishra.

The FIR was filed at the Tikunia police station under Indian Penal Code (IPC) Sections 302 for murder, 304-A for causing death due to reckless driving, 120-B for criminal conspiracy and 147 for rioting, 279 for rash driving, 338 for causing grievous hurt to any person by doing any act so rashly or negligently as to endanger human life, and other penal provisions.

According to the FIR, the entire incident was "premeditated," and the entire "conspiracy was hatched by the BJP Minister and his son," who committed the act in a display of hooliganism. The FIR also names 15-20 unidentified people as defendants.

The following is included in the FIR: " "The incident occurred around 3 p.m., when Mishra, along with 15-20 others armed with weapons, arrived at the protest site in Banbirpur in three speeding four-wheelers. Monu Mishra, who was sitting on the left side of his Mahindra Thar, opened fire, mowed down the crowd, and drove away. Farmer Gurvinder Singh, son of Sukhwinder and a resident of Matronia in Nanpara, was killed in the shooting."

It also claims that the vehicle of BJP MP's son, Ashish, overturned on the side of the road, injuring several other people, and that Mishra then opened fire, escaped from his car, and hid in a nearby sugarcane field.

The report further states that a video of a BJP Minister allegedly warning protesters opposing the center's three farm laws has already gone viral on social media. Despite the fact that he asked the protesters to mend their ways in the video, the Central Government did not take action against the BJP Minister.

On October 3,2021 , several farmers were protesting against the visit of Uttar Pradesh Deputy Chief Minister Keshav Prasad Maurya to Lakhimpur Kheri district when four protesting farmers were killed when an SUV mowed them down.

The police filed a first information report on October 4, 2021,  under Section 302 IPC against Ashish Mishra (son of minister Ajay Kumar Mishra) and several others in connection with the violence.

An alleged video of the incident has also surfaced on social media, showing a group of protesters walking down a road next to farm fields before being mowed down by a grey SUV coming up from behind.

The Uttar Pradesh government has announced that a retired High Court judge will conduct an investigation into the Lakhimpur Kheri violence, and that 45 lakh rupees will be paid to the families of the four farmers killed in the incident.