Large Haul Of Hooch Seized Ahead Of Holi 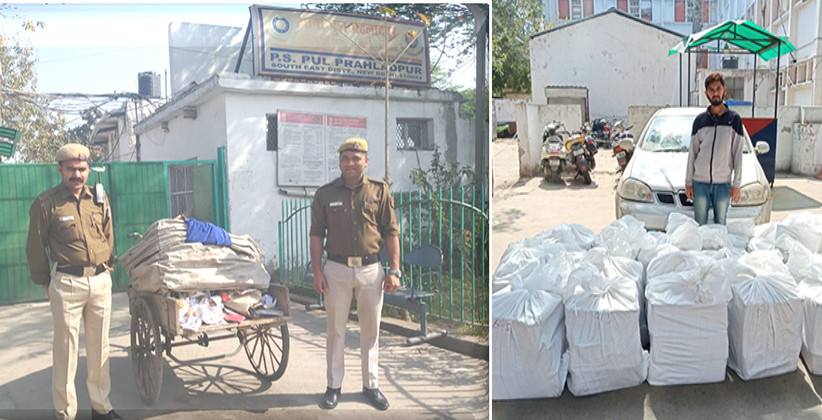 As the festival of Holi is here, the police have beefed up the security around the places where sensitivity remains on the higher side. Cracking down on liquor smugglers, the police arrested bootleggers supplying liquor in massive across the city and seized a big haul of liquor from the arrest. The police recovered from their possession more than 20,000 quarters of liquor. Keeping in view the revelry on Holi and general polls as well, patrolling in the district has been stepped up.

In 2 separate incidents, the police teams of PS Lajpat Nagar and Pul Prahladpur arrested 2 persons and seized 74 crates of liquor.

A team led by SHO inspector Pankaj Malik under the supervision of Birjinder Singh, ACP sub-division Lajpat Nagar intensified the patrolling and strengthened pickets in the area.

During patrolling, the police team gathered information about a liquor smuggler and a trap was laid under Nehru Nagar Railway Bridge. A Chevrolet Optra Car bearing with number DL 3CAA 1978 was seen coming from the Okhla Mandi side and was going towards Sriniwaspuri. The Police team flagged down the driver but instead of slowing down, the driver sped up the car. However, the alert staff intercepted the car with the help of barricades. The driver of the car was identified as Sumit Kumar 27 years. When the car was searched, 65 cartons of Haryana liquor were recovered.  45 cartons containing 2250 quarters of Rasbhara Santra Masaledar Desi Sharab, 13 cartons containing 624 quarters of Besto Whisky and 06 cartons containing 288 quarters of Officers Choice Blue Pure Grain Whisky were seized from the car. Subsequently, a case vide FIR No.122/19, under Sections 33 and 58 of the Delhi Excise Act, 2009, PS Lajpat Nagar has been registered.

In another case at Pul Prahladpur, a rag-picker is found to have been smuggling hooch. The police recovered 9 cartons (peti) containing 442 quarters.

A team of Pul Prahladpur comprising ASI Ram Dayal, constable Ramli Lal and constable Bheem was checking vehicles on Delhi-Surajkund border. During checking, a person riding a tri-cycle rickshaw was seen coming from the Surajkund side and going towards Sangam Vihar. The rickshaw was laden with sacks of rags. However, the police team got suspicious about the movement of the rickshaw and they intercepted it. During the search, under the sack of rags liquor cartons were kept concealed. 9 cartons (petis) containing 5 cartons of 250 quarters of Rasbhara Santra Masaledar Desi Sharab and 4 cartons of 192 quarters of Besto Whisky for sale in Haryana only were seized. The rickshaw puller was identified as Chitranjan Kumar 23 years. A case vide FIR No 56/19, under Section 33 of the Delhi Excise Act, 2009, has been registered at PS Pul Prahladpur and above accused Chitranjan was arrested and the rickshaw with the liquor was seized.