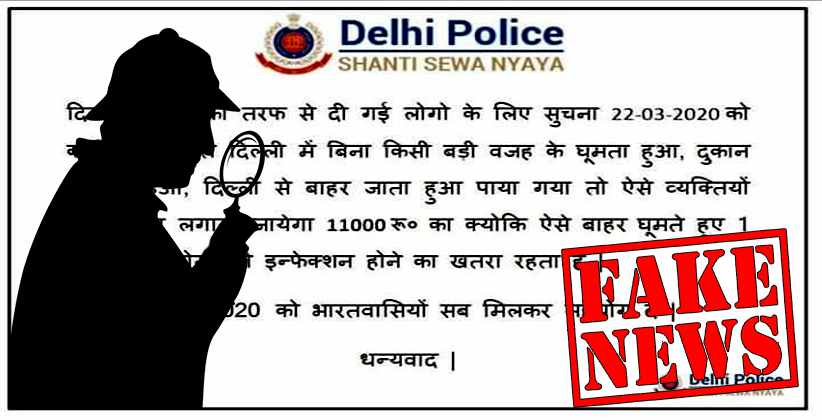 The Delhi Police today(March 21, 2020) has refuted claims that relate to a fake notification that is being circulated around on social media.

The notification reads that a fine would be charged on people who will violate the 'Janta Curfew' as announced by the Prime Minister Narendra Modi.

The Curfew is set to take place tomorrow (March 22, 2020). The notification has been confirmed to be absolutely false, Law Street Journal reports the same after looking into its dire falsity.

Further, the Deputy of Commissioner of Police of South Delhi, from his official twitter handle, also tweeted, "We have spotted this fake notice being circulated purportedly issued by Delhi Police. We have NOT issued any such advisory on imposition of a fine on March 22. Please tell your family and friends that this is FALSE & FAKE.

In a post-truth era, the transmission of fake news has gripped the world in equal parts. And India is not a new witness to it. Headlines that the fourth pillar of democracy gives in order to provide information to the citizens of the country are often disregarded by its own citizens who hamper it and turn it into false news. With the rise of technology and media platforms growing, the advent of fake news does not get curtailed but increases up to a further extent.

A person may find himself in trouble under the following sections of law if he is seen to be spreading or inculcating the spread of fake news: The people spreading fake news viz., the Content Creator and the Content Forwarder are usually punished under Sections 124A, 153A, 153B, 295A, 500, and 505 of the Indian Penal Code,1860 (IPC) they state:

In December 2019, the Ministry of Electronics and Information Technology had released draft changes to the 2000 IT Act. This initiative would require the social media platforms when compelled by the government to start tracing the originators of messages.  This initiative was aimed at curbing the spread of unlawful content and misinformation on social media platforms. Under the provisions of the Information Technology Act, 2000:

Section 69 (1) of the Information Technology Act, 2000 relates to how a controller can extend the decryption of information facilities to any agency. This is in reliance to the interception of information transmitted through any sort of computer resource. (Power to issue directions for interception or monitoring or decryption of any information through any computer resource). Failing to do so may result with a punishment, an imprisonment for a term that can extend to seven years. [69(2)], as authorized by the Central Government.

Section 79of the Act, provides for cases when the Network service providers or intermediaries are not held liable. This relates to the removal of doubts for any third-party information or data made available by him. If an intermediary receives ‘actual knowledge’ of any illegal content posted on it, it is obligated to remove such content within 36 hours. On failing to do so, the intermediary will lose its immunity from being sued. The new proposed changes under this section require the online platforms to deploy technology based automated tools to help identify or remove or disable access to illegal information or content.

Further to which, any sort of forwarding fake news on WhatsApp can lead to three years of imprisonment, the newly-formed Delhi Assembly Committee On Peace and Harmony said on 2nd March, 2020.

"We will apprise the people that if anyone shares fake news, hate content or a rumour, which can cause enmity between two communities, then it is a criminal offence which can invite a jail term of three years. We will seek complaints from people through the campaign in radio, newspapers and other media platforms,” Aam Aadmi Party (AAP) MLA Saurabh Bhardwaj said.