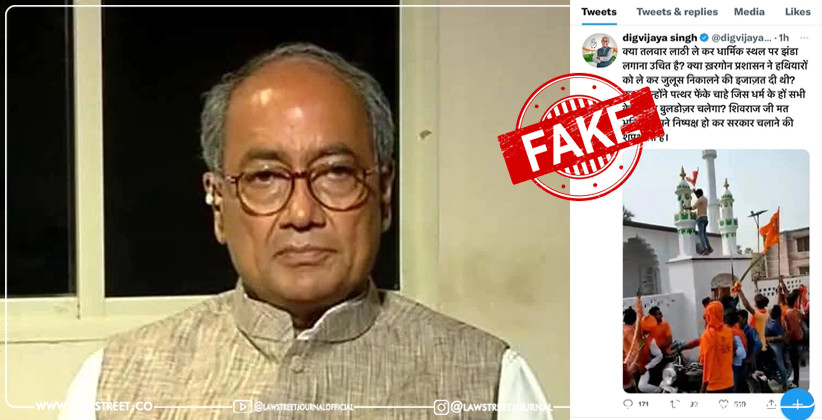 The state of Madhya Pradesh is considering legal action against Congress leader Digvijaya Singh for a fake tweet on the stone-pelting incident in Khargone. Since then, the tweet has been removed.

Digvijaya Singh, the former Chief Minister of Madhya Pradesh, is in hot water for a social media post that turned out to be a hoax. Digvijaya Singh used the microblogging site Twitter on Tuesday morning to upload a photo that he claimed was shot during the communal violence in Khargone on Sunday.

It was later shown to be a forgery. Some young people are seen in the snap erecting a saffron flag at a mosque. It turned out to be a vintage photograph from Bihar. After a while, Digvijaya Singh erased the tweet, but it had already gone viral.

"Did the Khargone administration allow a procession with weapons?" Digvijaya asked on Twitter. (This is a Hindi translation.)

Meanwhile,  the Home Minister, criticised the Congress leader over the phoney post. Mishra said, "Digvijaya Singh had earlier passed off a bridge in Pakistan as that of Bhopal and is now spreading confusion by telling people that the photo of a mosque is from Madhya Pradesh. I am taking an opinion from legal experts. A legal action can be taken against Digvijaya Singh."

While MP Shivraj Singh Chouhan, the state's chief minister, accused Digvijaya Singh of inflaming communal tensions. Chouhan took to Twitter to give his 2 cents on the matter: "Digvijaya Singh has tweeted a photo of a youth hoisting a saffron flag at a religious place, he is not from Madhya Pradesh. This tweet is a conspiracy to spread religious frenzy in the state and to ignite communal riots in the state. It is a conspiracy that will not be tolerated."

Stones were allegedly thrown at a procession in Khargone, Madhya Pradesh, leading police to fire tear gas shells to calm the scene, according the city's Additional Collector Sumer Singh Mujalde.

According to a senior official, stone pelting prompted arson and the torching of some vehicles and homes. The clash resulted in the injuries of three police officers.

Following the incident, the city was placed under curfew, which was extended on Tuesday and exams were postponed.