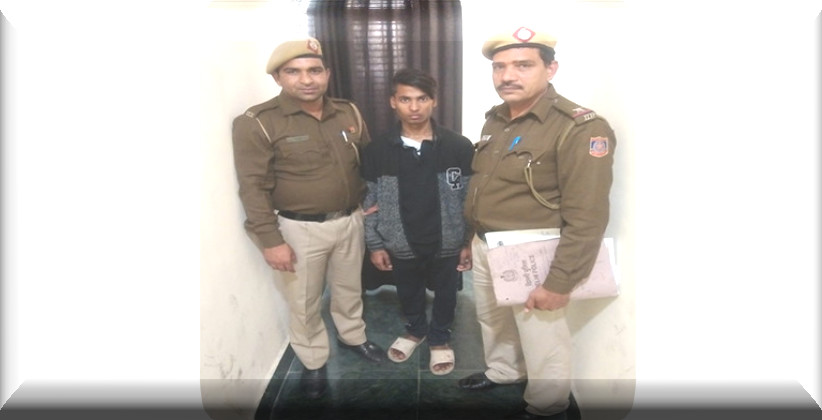 She conducted a reconnaissance of the targeted place, hatched a plot with her husband, got the duplicate keys of the house made where she worked at and finally executed the planned crime. However, the timely action cornered the couple and recovered the cash stolen amounting close to ₹ one lakh, 4 watches and jewellery pieces. The police also found upon them the duplicate keys used for unlocking the house. The accused have been identified as Nitesh Kumar alias Sunny 19 years and his wife Neetu 20 years.

The complainant, an elderly lady who went to her daughter's house in Dwarka when she returned in the evening she found the almirah unlocked and ransacked.

The lock of the almirah was opened using duplicate keys. In this connection, a case FIR No. 130/19, under Sections 454, 380 and 34 of the Indian Penal Code, 1860, was registered at PS Kalkaji and investigation was taken up.

The team started working day in day out, gathered leads and collected CCTV footage. The police rounded up several people with similar modus operandi and even interrogated them. A close watch on the movements of the domestic helps, drivers, guards etc. working in the locality was kept. The police team examined the recently appointed maid Neetu. During examination, she denied having any involvement in the theft. However, on being confronted with her movements, there was contradiction in the version stated by the maid. On sustained interrogation, the accused Neetu broke down and confessed to committing the crime.

"Neetu revealed that she with her husband Nitesh conspired to burgle the house. At her instance, her husband was also arrested. It was learnt that the accused used to visit thrice a week to clean the house and charge ₹ 50 for every visit. However, no verification was conducted by the complainant. They got the duplicate keys made as she knew the details of the house during her service hour there. Neetu went inside and her husband remained standing outside. Neetu dropped the keys to her husband so that he could get the duplicate keys made. Her husband rushed quickly and got the keys made. He returned the keys which she put them back in place. They in the absence of the victim entered the house and decamped with cash and other valuables from there," Chinmoy Biswal Deputy Commissioner of Police South-east district spoke.

The case has been registered and further probe is on.