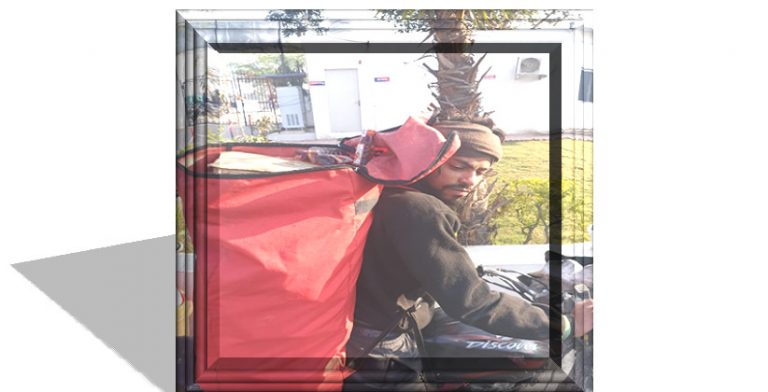 During a round of routine patrolling, the south-east district police nabbed a motorbike borne man Vivek 22 years posing as a food delivery boy with 6 cartons (Peti) containing 300 quarters of Haryana liquor seized.

A team led by SHO inspector Sanjay Sinha under the supervision of ACP sub-division Sarita Vihar Dhal Singh, intensified the patrolling and strengthened picket checking in the area. During patrolling, the police team gathered information about a liquor smuggler and the said information was further developed. The police team started vehicle checking in the area. During checking, one person carrying a delivery bag was seen coming on a Bajaj Discover Motorcycle with registration number DL 3SCE 1675. The police team intercepted the bike rider. The rider was identified as Vivek. On examination about the bag, the rider stated that he had worked as a delivery boy and was carrying parcels of his customers in the delivery bag.

When he opened the bag, 6 cartons of liquor containing 300 quarters of Taza Santra Sharab, 'for sale in Haryana only' were found in the bag. In this regard a case vide FIR No.70/19, under Sections 33 and 38 of Delhi Excise Act, 2009, was registered at PS Kalindi Kunj and investigation was taken up. Accused Vivek was duly arrested and motorcycle used for smuggling and recovered liquor was duly seized.

"During sustained interrogation, the accused Vivek disclosed that he is a school drop-out and worked as an unskilled labour in his village. He came to Delhi a couple of months ago in search of some work. He met one Kalu who wheedled Vivek into supplying liquor from Faridabad to Delhi to make a fast buck. He was paid ₹500 for the delivery of the consignment, a motorbike to post the 'parcel' and a delivery bag. He used to procure liquor from godowns of Faridabad and fill the liquor cartons in his delivery bag. He entered Delhi through Ismailpur Border, Faridabad," Chinmoy Biswal district police chief spoke.

The case under relevant sections of Indian Penal Code, 1860, have been registered. Further probe is underway to trace his associates.