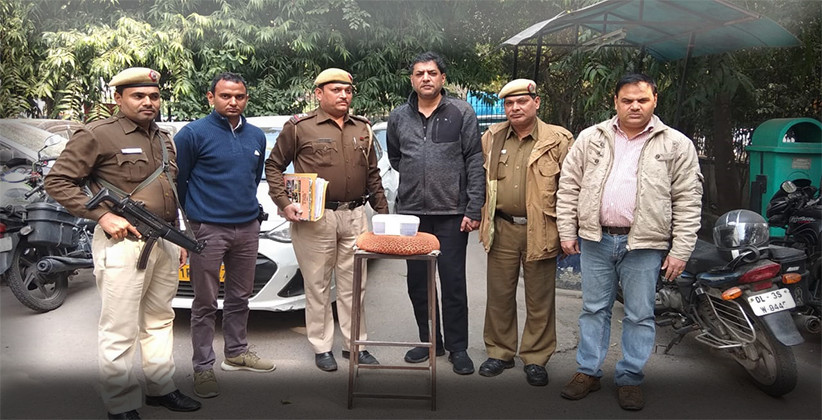 An MCD councillor candidate was caught when he had an altercation with an UBER driver and whipped out a pistol and began to brandish in the air to panic the cabbie in Amar Colony.

He, in the heat of the moment, smashed the windowpane of the cab and fled the crime scene but was chased and overpowered by the police. One automatic pistol with two spent cartridges were recovered from him. The police also seized his Hyundai i10 car DL 9C AN 6043.

Earlier on, Rajan Bharat 41, the accused was arrested for Arms Act, 1959, under PS  Defence Colony.

Around 3 on the morning of January 31, 2019, the police received a call about a quarrel between a cab driver and the owner of the i10 car. The accused Rajan broke the glass of the cab and even threatened the cab driver by brandishing his pistol. When the PS concerned received the call, SHO Amar Colony inspector Anant Gunjan swung into action without any delay and with SI Manoj Kumar and ERV ASI Ashok and others rushed to the spot. The accused Rajan was nabbed after a long chase. That night patrolling was intensified, barricade checking was stepped up and PCR van also assisted in the chase. When the alleged car was spotted in the area of Amar Colony, he was flagged down but he did not stop instead sped away sensing danger. After a hot chase, the police intercepted the car near D Block and caught him.

"It was learnt that the cab driver came to pick a passenger and was waiting on the way. In the meantime, the accused driver too came in his car and they both had a quarrel on giving space to let him pass by. The accused driver pulled out a pistol and broke the window of the Uber cab and fled the crime scene.

Rajan who is a property dealer by profession disclosed when interrogated that he had come to attend a birthday party in a restaurant at East of Kailash. After the party was over, he came to Amar Colony to drop his friend off and while he was returning, after dropping his friend, an altercation took place between him and the complainant of the UBER driver. Accused Rajan smashed the windowpane of the cab and threatened him whipping out a pistol." DCP Chinmay Biswal spoke.

Further interrogation revealed that he procured the pistol from UP's Meerut through some illegal means. He was involved in three different criminal cases in the past and got convicted in Arms Act, 1959.

"The accused told us that he had contested and lost MCD councillor from Kirti Nagar in 2012. He carries the fire arms to flaunt. We are trying to find out the source of the weapon he got and the history of the spent cartridges where and what he had used them for." Biswal concluded saying.