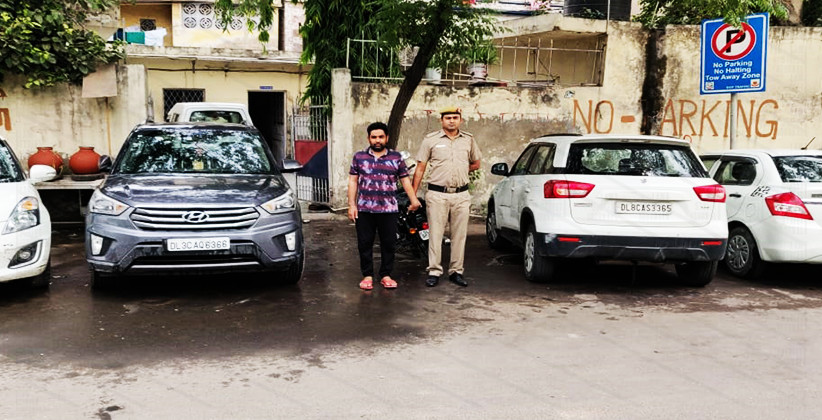 The team of Anti-Auto Theft Squad (AATS) of South-East District arrested a notorious auto-lifter identified as Naseem 40 years of Nuh, Haryana. The police claim to have solved 6 cases, and also from his possession recovered 6 luxury cars.

Acting on a tip-off, the police deployed informers and laid traps to apprehend criminals. ASI Vinod gathered information regarding theft and delivery of a Maruti Swift car. The police team laid a trap near Captain Gaur Marg, Near Okhla Sabzi Mandi, one white Maruti Swift car bearing registration No- DL 8 CAV 6120, which was coming from Ring Road, Lajpat Nagar side was intercepted. The driver of the car was overpowered by the staff of AATS/South East District when he stopped the car at the traffic signal, the driver of the car was identified as Naseem. On verification, the said Maruti Swift car was found stolen from Keshav Puram vide E-FIR No- 015859/19. Subsequently, Naseem was arrested under Section 41(1) of the Code of Criminal Procedure, 1973, and the stolen car was duly seized.

"During sustained interrogation, Naseem disclosed that he with his associate Kabootar used to steal the cars on demand. They both are the natives of the Mewat region. Further, they used to dispose the stolen cars to another receiver of Mewat later on identified as Jafru," DCP South East District Chinmoy Biswal spoke.

Naseem with his associate stole a Maruti Swift car from Keshav Puram area and parked the car in the residential area of Lajpat Nagar. The accused Naseem was going to deliver the stolen Maruti Swift Car to Mewati receiver Jafru but was intercepted on the way. At the instance of the accused Naseem, raids were conducted in the area of Aligarh, Mewat and Delhi NCR and 5 more stolen cars were recovered. ​

"Naseem used to work as a scrap dealer and had contacts with the surveyors of the automobile insurance companies. He used to purchase the accidental total loss vehicles and its documents from the company concerned as scrap. Superimposed particulars of scrap vehicles on stolen cars. Thereafter, the accused used to target the similar cars which they had procured as scrap. The accused either used to steal the car themselves or purchase the stolen cars from other auto-lifters. After purchasing stolen vehicles from auto lifters, Naseem with his associates used to superimpose the particulars of the said accidental/scrap cars on the stolen vehicles. Thereafter, the accused used to dispose these stolen luxury cars in the market at actual prices," Biswal concluded saying.

Further investigation of the case is in progress and the police stations concerned have been intimated.