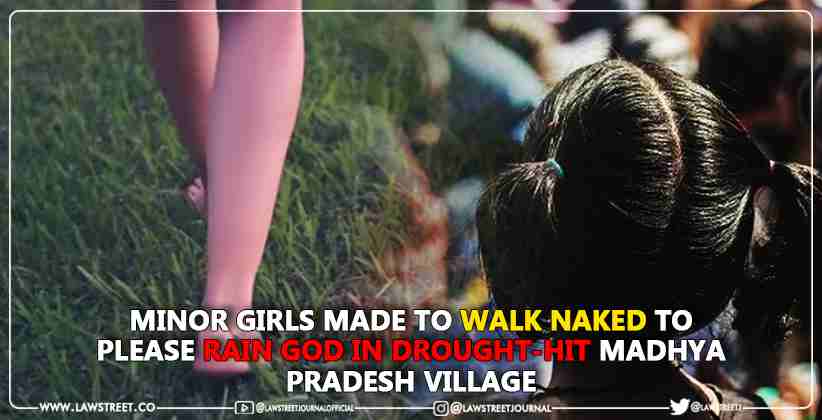 Minor girls were forced to walk naked and beg at the homes of locals in a tribal village in Madhya Pradesh for relief from a drought and to appease the rain god. According to officials, the incident occurred on Sunday (5th September, 2021), in Damoh district as part of a ritual.

The Damoh district administration has been asked to submit a report to the National Commission for the Protection of Child Rights (NCPCR).

A video purportedly shows at least six bare-chested girls around the age of five walking together with a wooden shaft on their shoulders and a frog tied to it. A group of women can be seen singing devotional songs and walking alongside the procession.

According to a report in India Today, the girls go door to door in the village, begging for flour, pulses, and staple food cereals. The items gathered are then donated to the village temple for a 'bhandara' (community lunch). During the ritual, all residents must ‘Mandatorily' remain present.

In another article, some women stated that the practise would help bring rain to the region where the paddy crop is drying. They added that during the procession, they would collect raw food grains from the villagers and then cook food for a 'bhandara' (community feast) at a nearby temple.

They can be heard telling the person who recorded the incident, "We believe this will bring rain." The village is about 50 kilometres from the Damoh district headquarters in the rain-stricken Bundelkhand region.

According to police, the ritual was carried out with the permission of the young girls' families. Damoh Superintendent of Police (SP) DR Teniwar stated that police were made aware of some girls paraded naked to appease the god as part of local practise and prevailing social evils. “Police are looking into this incident. If it is discovered that girls were forced to walk naked, action will be taken,” he said.

Damoh collector S Krishna Chaitanya stated that the local administration will submit a report to the NCPCR in this regard. He stated that the parents of these girls were also involved in this incident, and that an awareness campaign would be launched to educate the villagers on the futility of such practises.

According to the district collector, no villagers complained about the 'ritual.' "In such cases, the administration can only educate the villagers about the futility of such superstition and make them understand that such practises do not produce desired results," he told reporters.

'Allow Second COVISHIELD Dose After 4 Weeks from First for those who Want it Early': Kerala High Court to Centre