Most WANTED Interstate Criminal With One Lakh Bounty Arrested By Spl. Cell 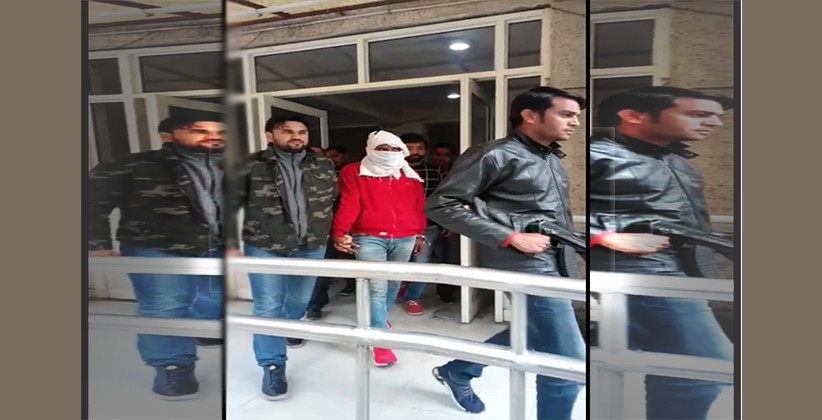 Delhi Police's Special Cell has caught a most wanted criminal with one sophisticated pistol and five live cartridges. Arshad alias Rana 35 from Mewat (Haryana), carried a bounty of ₹1.25 lakh on his head and was wanted in several heinous crimes like dacoity, robbery, intimidation, assault on police, and kidnapping for ransom in other states. He was also wanted in a case of MCOCA (Maharashtra Control of Organized Crime Act, 1999). He, on the run, had been giving police the slip for the past one and a half years.

A team of Special Cell SR led by inspector Shiv Kumar, under the supervision of ACP Attar Singh nabbed the desperate criminal, Arshad on Mathura Road, Badarpur on a tip-off followed by a trap laid by the team.

After painstaking efforts of more than a year, inspector Shiv Kumar received secret information that an active member of Salli gang namely Arshad was roaming in the NCR to commit a crime. Sources were developed, gathered information about members of this gang. Earlier on, Arshad had escaped from the custody of MP police when he was being brought from Ujjain jail to be produced in Faridabad court. He escaped from a running train by removing handcuffs near Mathura on August 23, 2017. Since then, he has been absconding and evading his arrest.

Salli Khan and his associates had created mayhem by committing spree of armed dacoities, robberies, extortion in various states including Delhi, Haryana, Rajasthan, MP, UP, West Bengal, Bihar, Andhra Pradesh, Maharashtra etc. in the year 2011 & 2012. Salli Khan along with 17 associates including Arshad were arrested and more than 60 cases of armed dacoity, robbery, kidnapping, extortion etc. in more than 10 states were cracked by Special Cell in the year 2012. Later on, in the year 2013, a case under MCOCA against members of this gang was registered and 22 persons including Arshad and kingpin Salli Khan were booked in the said MCOCA case, which is pending trial in Patiala House Court, Delhi.

Members of this gang used to rob SUVs from highways and later on they used these robbed SUVs for chasing and waylaying trucks laden with expensive articles. They used to abduct occupants of trucks and keep them confined till robbed articles were disposed of by them. They, later on, used to abandon trucks and abducted persons. Members of this gang are ruthless while committing a crime. They do not hesitate to open fire at the slightest provocation or at police personnel when chased by them.

"Members of this gang have attacked and even fired on various police teams in the past when they were cornered or were being chased by the police teams. Arshad belongs to a poor family from the Mewat region and is a school dropout. He used to commit petty thefts in his area and came in contact with Salli Khan and his brother Jafru. He then remained associated with their gang for about 10 years during which he committed a series of heinous offences like armed dacoity, robbery, extortion and intimidation. Further investigation is underway," DCP Special Cell SR Pramod S. Kushwaha spoke.