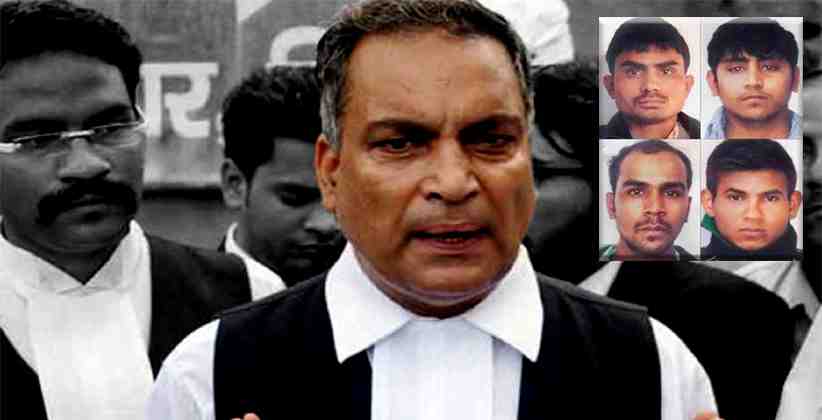 The lawyer representing the four Nirbhaya rape and murder convicts, AP Singh on Monday (February 3, 2020) said, "India will not tolerate the deaths of five to avenge the death of one." It is to be noted, his statement has come after the Delhi High Court reserved its order against the orders of Delhi Court sustaining that the execution against four convicts be stayed. He also said that in one corner there are mothers of four convicts and one mother of the victim on the other side which shouldn’t be neglected. "The political trial is going alongside the trial of public sentiments due to upcoming the Delhi State Assembly elections," he added. It is an injustice to hang the convicts in a hurry and questioned the haste of the Delhi High Court in this case saying "Justice hurried is justice buried." The advocate of the four convicts felt that the convicts are undergoing the brunt because they are poor, rural and come from Dalit families. Till last year, the Central Government wasn’t a party to this case, but when the execution got stayed in sine die, petitions were filed and cases were heard on weekends by the Court. The lawyer justifies giving importance to the Constitution of India despite which he claims people are writing against his family on social media. He brought the awareness to the Red-fort bomb blast accused Arif Alias Ashfaq whose curative petition, review petition, Special Leave Petition (SLP) and Mercy Petition have been rejected, despite that neither the Delhi Government nor the Tihar Jail has given any notice for his execution.

Nirbhaya’s mother Asha Devi cited Singh of bragging to her in open court that execution of Nirbhaya convicts will never happen. The Delhi High Court on Sunday (February 2, 2020) reserved its judgment on the Centre’s plea for the execution of the four rape convicts. Justice Suresh Kait hearing the case said the bench will pass an order after all parties have finished their arguments. The Solicitor-General of India, Tushar Mehta representing the Centre’s plea told Justice Kait that Pawan Gupta’s act of not filing curative or mercy petitions timely is deliberate and calculated action which is undertaken to frustrate the mandates of law.

The Additional District Court did conclude that the Court can pursue Rules 836, 850 and 854 of the Delhi Prison Rules, 2018 and opined that it has "no hesitation" in postponing the death warrant qua Vinay because of the pendency of his mercy plea before the President. As far as other convicts are concerned, the court added that second proviso to Rule 836 provides those cases where the appeal or application by one is pending; the execution to sentence shall be postponed in case of all. The court after hearing both sides came up to a conclusion that it is appropriate that execution should get postponed till further orders aren’t made.

Nirbhaya was gang-raped and savagely assaulted on the night of 16th December 2012 which happened inside a moving bus in South Delhi. The trial of five men started in a special fast-track court in March 2013, the prime-accused perpetrated suicide by garrotting himself in Tihar Jail during the days of the trial. A juvenile was sent to an undisclosed place due to threat to his life after he was released from correctional home in 2015.