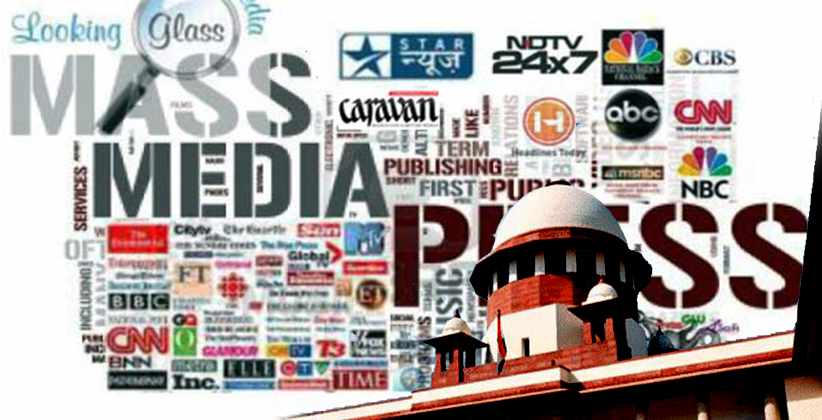 A plea in the Supreme Court citing ‘professional duty’ of Republic TV & Zee TV states that no FIR can be launched against any media house until it is sanctioned by the Press Council of India. The petition is primarily based on the recent spate of FIRs against Arnab Goswami and Sudhir Chaudhary for allegedly inciting hate between two religious’ communities.

In his plea to the apex court, Advocate Ghanshyam Upadhyay has stated that - “The court needs to preserve and protect the fundamental rights of the press, electronic and print media guaranteed under Article 19(1)(a) of the Constitution of India due to which general public becomes aware and able to form an opinion about the functioning of the respective governments and officers working under it.”

The petitioner highlighted how the two news channels mentioned in his plea have been so crucial in pointing out the reasons for the spread of this virus in India and facts about the Palghar lynching case.

The plea heard in the Supreme Court read as follows - “Republic TV and Zee News during the spread of the pandemic and consequent lockdown in the country telecast news on their respective TV channels and exposed Tablighi Jamaat/ Maulana Saad responsible for spreading the deadly virus all over the country. Similarly, the Republic TV questioned the Congress President for maintaining complete silence after the brutal massacre of the two Hindu Saints and their driver at Palghar on 16.04.2020.”

The petition further elucidates about how these two TV channels have been rendering invaluable services to the nation by “raising issues of great public importance, exposing anti-national element and their anti-national activities and sinister design of destabilizing the country” and that this is done to establish their own theories and way of governance, which cannot be countenanced.

While holding the prior sanction for FIR against the press the plea also prayed before the court to issue guidelines so that the sanctioning authority decides the application submitted by aggrieved person/s who seeks to lodge/file FIR/ prosecution against the press/media and its people for the offenses punishable under sections 295A, 153, 153A, 153B, 298, 500, 504, 505(2), 506(2) r/w Section 120-B of the Indian Penal Code within a time-bound and systematic manner. It has also been claimed by Upadhyay that the two television channels which have been targeted, were performing their ‘professional responsibility’ and ‘duty towards the people of the country.’

The petition while stating that if the court does not lay a guideline then there was “every possibility of disgruntled element resorting to silence/crush and suppress media by entangling them in false, frivolous and vexatious FIRs” also expresses apprehension of some more grave danger to the journalists.