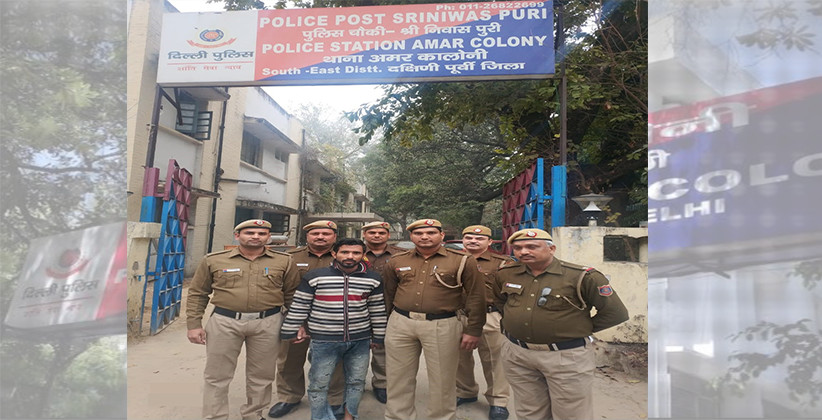 An old friend committed robbery and even slew his friend by getting him drunk and slitting his throat. The accused was neck deep in debt as he remained jobless for long. That forced him to commit the crime.

The team of PS Amar Colony, South-East District received a call about a dead body lying near the railway track. The police team reached the spot and found an unidentified body in a decomposed state. The body was sent and preserved at AIIMS as the police first had to identify the body to reach any conclusion. The police launched a door to door survey in the area of Sriniwaspuri asking for the name and other relevant details about the deceased. Having spent more than two weeks, the police finally got the deceased identified as Arshad Ali 23. The PM report confirmed his death by fatal head injuries and the deep gash in his neck. The police registered the case of murder at PS Amar Colony and inquest proceedings instituted.

The team worked relentlessly on the information received from the relatives, friends and neighbours which revealed that the deceased was last seen with one Farman 22 who was using the phone of the deceased. His location was traced in Noida. The police carried out raids on his probable hideouts, his house was found locked. Later on, he was caught and interrogated.

"During investigation, Farhan stated that he had purchased the said mobile phone from one Farman, who lived in the same village. It is pertinent to note that he was the same Farman with whom the accused was last seen. Therefore, the doubt cemented that Farman had a hand in this crime. When the police reached the house of Farman it was found locked and raids were conducted in Noida and Delhi for his search. On January 1, on the basis of information gathered, the alleged Farman was apprehended from Okhla Sabji Mandi. Initially, he tried to mislead the police and denied having any involvement in the case but on sustained interrogation, he broke down and confessed to the crime." District police chief Chinmoy Biswal stated.

Farman disclosed that he used to live at Gandhi Camp, SN Puri and work in Okhla Mandi. Around 4-5 years ago, due to financial problems, his family sold out their house and moved to Noida. He further stated that he had no work and was in debt.

He then hatched a plan to rob someone so as to survive.

"On January 10, he came to Okhla Mandi to execute his plan. At the Mandi, accused Farman met his old friend Arshad. Farman bought 5 beers from a nearby wine shop and he alongwith Arshad went towards the deserted side of the railway track. Both of them sat together and consumed beer. When Arshad got drunk and under the total influence of the alcohol, Farman saw an opportunity and hit his head with a big stone. Arshad became unconscious and thereafter, Farman slit his throat with a knife.  The accused took his mobile phone and other articles and fled the spot." Biswal added on.

The accused sold the mobile phone of the deceased to one Farhan of his village.

Accused Farman further disclosed that he had intentionally taken the chosen victim to an isolated location near the railway track and crushed his head with a stone, to let people and police assume it being a railway accident. Further investigation is in progress.