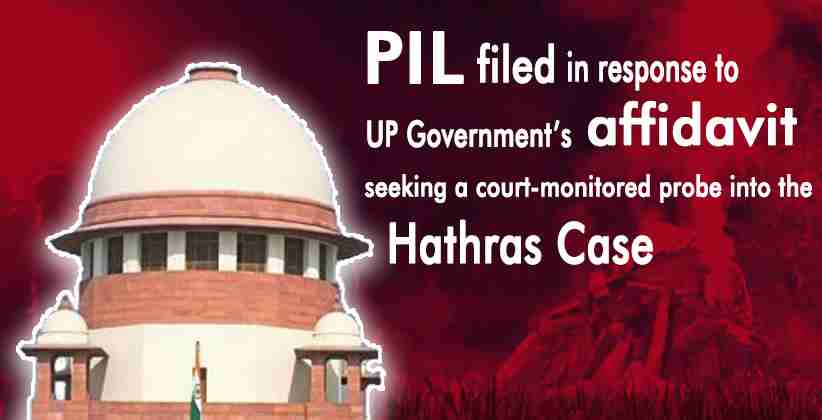 Activist Satyama Dubey has filed a PIL in the Supreme Court in response to UP Government’s affidavit seeking a court-monitored probe into the Hathras Case. He said that the UP State’s affidavit is just “eyewash” and it was filed before even issuing the notices in order to divert the attention of the court. This was done in a bid to show that the investigation regarding the Hathras matter is being carried out in the right direction.

Dubey submitted the following “Affidavit was filed prior to the listing of the matter before this Hon’ble Court and in anticipation and before the issuance of the notice in the above-mentioned matter. SIT was constituted by the State Government of UP just to divert the attention of this Hon’ble Court. In the present matter, the petitioners had requested to constitute an SIT of the serving or retired of the Supreme Court of High Court Hon’ble judges. A three-member Special Investigation Team was set up by the UP Government in a great rush and it has received immense criticism over its handling of the case.”

He also informed that the SIT did comprise of respected persons but asked the court to constitute one more SIT which comprised of the former judges of the Supreme Court like Justice Uday Umesh Lalit, Dr. Justice D.Y.Chandrachud, Justice Madan Bhimarao Lokur(Retd.), JusticeKurian Joseph(Retd.), Justice R. Banumathi(Retd.) and Justice Deepak Gupta (Retd.) as these judges have extensive knowledge in the field of Criminal Jurisprudence.

He also said that the affidavit filed by the UP Government is full of contradictions and formed only to cover up the incident. The Hathras case is that of brutal gang rape, however, it is alleged that the police have filed the FIR under section 307 of the IPC as an attempt to murder.

The locus of the petitioners was also questioned by the court that day and Chief Justice Bobde said “This is a shocking incident. That is why we are hearing you out. We don’t know if you have a locus. You are not family and we know you are representing the petitioners. But who are the petitioners? Who are you? Everybody is shocked by this incident, but when a court asks you this, it means what is your locus?”

In response to this, the petitioner has submitted that he has a locus to maintain the petition as he is a citizen of the country and he was shocked by the brutal accidents and subsequent state action. He also said that every citizen had a right to approach before the Hon’ble Court if any injustice is caused by the State, its authorities, or the State Administration.