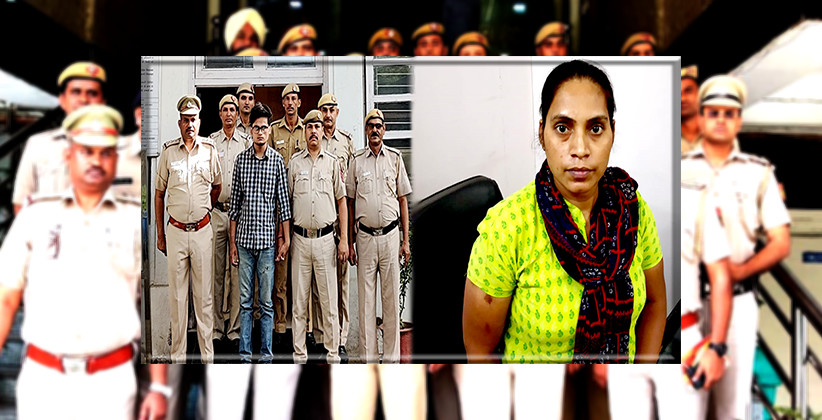 The police have worked out a case of brutal murder by arresting two and apprehending one CCL (Child in Conflict with Law) in this connection. Those arrested in the crime have been identified as Anju 34 years, a maid who worked in MP flats in South Avenue and Shivam Thakur 21 years her lover.

A call was received where it was learnt that the injured Suresh Kumar 52 years was rushed to RML Hospital from the spot, his home where he was assailed. But at the hospital, he was declared brought dead. He was found with a deep gash in the neck that revealed excessive bleeding that may have caused death.

An FIR 9/19 under Section 302 of the Indian Penal Code, 1860, was registered and the investigation was taken up by Ganesh Kumar, Inspector/Investigation PS South Avenue.

The case went almost blind without any eyewitness behind as the victim was alone at home when attacked, nor was there any clue left by the killers.

During the investigation, it was learnt that on the fateful night, the wife of the deceased along with her children were out of their house for a walk to Teen Murti Road. The movements of the wife were found to be suspicious. It was informed by one of the persons living in the area that he had seen two men with mask on fleeing in the night under the cover of darkness around the same time when the murder occurred. One of the informers told the investigators that the wife was often seen talking on the phone and she had been visiting the family and friends in Meerut regularly.

This brought the wife and some other persons under the lens of the cops. One name Shivam also figured through electronic surveillance.

Several persons amongst the friends and family of the deceased were interrogated and multiple teams were formed to conduct simultaneous raids at all possible locations of Shivam who was finally found in Burari at his relative’s house. One minor brother of Shivam also closely matched the description given by the witness.

They confessed to having committed the crime when interrogated and the CCL was apprehended while Shivam and Anju (wife of the deceased) were arrested for the murder of Suresh.

On further interrogation, Shivam the prime accused disclosed that he had developed intimacy with Anju, the deceased Suresh did not have good relations with his wife Anju who was not happy with her married life. Her husband, Suresh used to gamble in ‘Satta’ from his home this had many visitors dropping in sometimes uninvited and unannounced which Anju strongly abhorred and objected. Anju revealed further that some persons came to her house, and her husband forced her to make tea and food for them even in odd hours of the day. Before the incident, some one month back, Anju even consumed poison after a tiff with her husband. When Shivam asked her the reason, she insisted that either she or her husband should die.

After that Shivam alongwith Anju hatched a conspiracy to kill Suresh. He involved his friend Aman from Meerut who agreed and asked for money. Anju promised seven thousand rupees for the crime. On the fateful night, Aman and his brother CCL left for Delhi. Upon reaching South Avenue, as per plan, the family was out for a walk while Suresh was sleeping alone at home.

The CCL and the accused Aman entered the house tiptoeing and silently slit his throat in sleep.

While Anju and Shivam have been arrested and the CCL has been apprehended in the case, accused Aman has been on the lam ever since the crime was commissioned. Teams have been sent to arrest him.

Police teams are regularly conducting raids at the possible hideouts of the accused.

The police from their possession have recovered mobile phones of Shivam, Anju and CCL with the blood stained clothes of the deceased Suresh.

1984 Anti-Sikh Riots: Death Penalty For One Convict, Life Imprisonment For Another