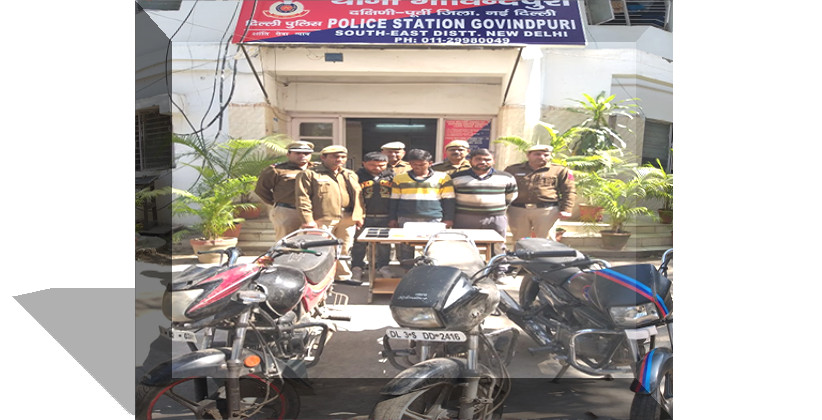 A gang of desperate robbers was busted by Govindpuri police and recovered from the three arrested one country made pistol, 4 live cartridges, 3 stolen bikes and 6 mobile phones snatched by them from different areas.

Rizwan 18 years, Zakir 27 years and Yogesh 24 years had been operating in the area for some time. The police have worked out 6 cases in which the gang was involved.

The police stepped up patrolling in the area vulnerable in nature and special pickets were erected for checking of suspects. The staff was directed to keep a close watch on the movements of persons with criminal background and those just out of JC. Information network was activated and the movement of the criminals was located.

The police of PS Govindpuri conducted special picket checking near School Block, Tughalkabad. Around 10:30 in the evening, the police noticed that 3 suspected persons riding on a bike trying to run away on seeing the alert checking. The picket staff signaled them to stop for checking.  But the suspects instead of slowing down the bike tried to speed away. Noticing their movement, the police party responded quickly, chased the suspects and managed to overpower them.

The police recovered the pistol with 4 live cartridges and mobile phones when searched.

Accordingly, a case vide FIR No. 72/19, under Sections 25, 54, 59 of the Arms Act, 1959, was registered as PS Govindpuri and the investigation was taken up. The Hero Splender motorcycle which the accused persons were riding was also found stolen from the area of PS Govindpuri vide FIR NO. 1719/2018, under Section 379 of the Indian Penal Code, 1860.

"During sustained interrogation, the accused disclosed that they all resided in the vicinity of Tughlakabad. All the accused are school drop-outs and are addicted to liquor and smoking. In order to meet their needs, they took to robbery, snatching and theft. Accused Zakir and Yogesh have previously been arrested in the cases of robbery, snatching, theft and Arms Act," Chinmoy Biswal DCP south east district spoke.

Further disclosure made by the accused said that they would steal motorbikes and mobile phones from the area.

"They would use a pistol to threaten the victim in case they resisted. The gang led by Zakir chose isolated stretches to strike. The case has been registered and further investigation is on," Biswal added on.