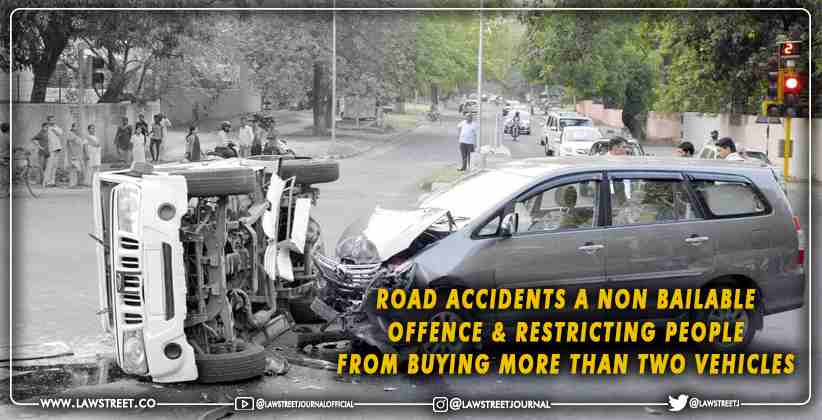 A plea has been moved before the Supreme Court seeking directions on the Centre as well as Union Territories for making road accidents as non-bailable offence, so as to create an apprehension in the mind of drivers, compelling them to drive cautiously. The plea additionally prays directions to reduce the vehicle density on roads by restricting people from buying more than two vehicles in a family.

Placing reliance on the information and documents obtained from Ministry of Road Transport and Highways, portals and RTI applications, the plea moved by Shrikant Prasad, avers that around 67% accidents in 2019 occurred due to over-speeding and rash-negligent driving.

"Road accidents continue to be a leading cause of death, disabilities and hospitalization in the country despite our commitment and efforts. India ranks first in the number of road accident deaths across the 199 countries and accounts for almost 11% of the accident related deaths in the World," the plea reads.

"The Government is finding the vaccine to curb deaths due to pandemic and rightly so but what about the vaccine to curb lakhs of innocent deaths each year due to negligence of others. Due to the present "lenient sentencing" under Section 304-A (provides for maximum two years imprisonment , or with fine, or with both), we have seen that convicts invariably get even more leniency or no jail at all and get away with only fine."

The plea suggests amendment in section 304A of the Indian Penal Code to make the offence of rash and negligent driving non-bailable and and to shift of onus on accused as at present provided.

Amendment in section 279 and 337, 338 of the Indian Penal Code to make these offense non bailable. As the number of road accidents are increasing day by day across the country due to the increasing in number of vehicles and rash driving ,to curb the accidents the law must made with few deterrent effect as there is no fear in the mind of offender," the plea reads.

"A professional driver pedals the accelerator of the automobile almost throughout his working hours. He must constantly inform himself that he cannot afford to have a single moment of laxity or inattentiveness when his leg is on the pedal of a vehicle in locomotion. He cannot and should not take a chance thinking that a rash driving need not necessarily cause any accident; or even if any accident occurs it need not necessarily result in the death of any human being; or even if such death ensues he might not be convicted of the offence; and lastly, that even if he is convicted he Would be dealt with leniently by the court. He must always keep in his mind the fear psyche that if he is convicted of the offence for causing death of a human being due to his callous driving of the vehicle he cannot escape from a jail sentence," the plea reads further.

The plea seeks the following prayers:

This court may pleased to issue a mandamus writ directing respondent no 1 to Respondent no 34 to take appropriate steps by making section 279, 304A , 337, 338 of I.p.c state amendments ,With reference to road accidents as non bailable offence with reversing the onus on accused so that be an apprehension in the mind of offenders which compels them to drive with cautiously.

Direct respondent no 1 to 34 to take appropriate steps to reduce the vehicle density on roads by restricting the people from buying more than 2 vehicle in a family as in Singapore.

Direct respondent no 35 to 59 to direct their subordinate courts to entertain the accident cases and decide the bail applications on merits and not in a routine manner u/S 436 that the fear of law is generated in the mind of the accused and road users as per the the judgement if this honourable court mentioned in this writ petition.

Constitute Committee by respondent number 1-34 to resolve the vehicle congestion and its consequences to the environment to take appropriate steps.