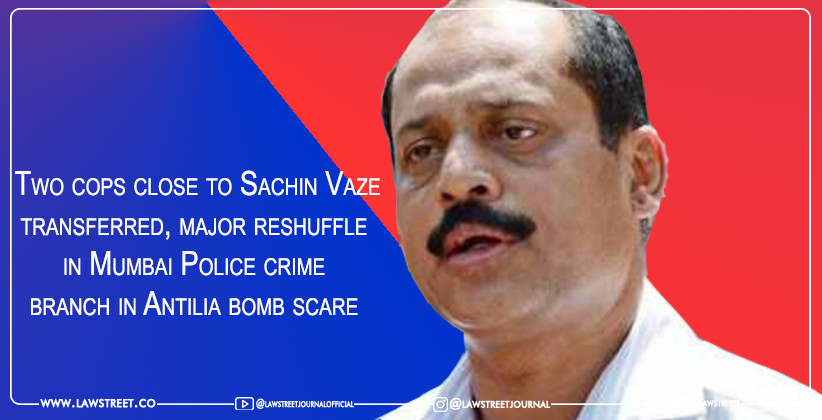 Both of them have reportedly been questioned several times by the National Investigation Agency (NIA) in connection with the Antilia bomb scare case.

The Antilia case dates back to Thursday, February 25, 2021 where an explosives-laden SUV, comprising of 20 unassembled gelatin sticks were found parked near industrialist Mukesh Ambani's Mumbai house Antilia. Besides this, the police also found a threat letter issued to the Ambanis.

As the investigation of the case was rolled out, the police found that the SUV in question was in possession of a Thane-based businessman named Mansukh Hiren. When further enquired regarding the SUV, Mansukh Hiren told the cops that his car was stolen, and that he had filed a police complaint about it.

However, on March 5, Mansukh Hiren was found dead on the banks of a creek in Mumbra on the outskirts of Thane. His wife has alleged that he was murdered by Sachin Vaze, who had been investigating the Antilia bomb scare case. Sachin Vaze's role has also come under the scanner for his alleged involvement in staging the bomb scare outside Mukesh Ambani's house.

Raising these issues in the Maharashtra Assembly, Leader of Opposition and former Chief Minister Devendra Fadnavis revealed that Sachin Vaze had been in constant touch with Mansukh Hiren.

With further escalation of the controversy, the National Investigation Agency (NIA) took over the investigation and arrested Sachin Vaze on Friday, March 12, 2021. He was also suspended soon after.

Furthermore, he Maharashtra Anti-Terror Squad in a press conference alleged Sachin Vaze was the "key conspirator" in the Mansukh Hiren murder case.

Meanwhile, it is also to be noted that API Riyazuddin Qazi and API Prakash Hoval are not the only cops who have been transferred.

The Mumbai Police has undergone a major reshuffling in its crime branch with than 28 police inspectors, mostly in-charge of United 16 APIs (handling detection work), and 19 other cops being transferred from the crime branch to police stations, local arms, special branch, among others.