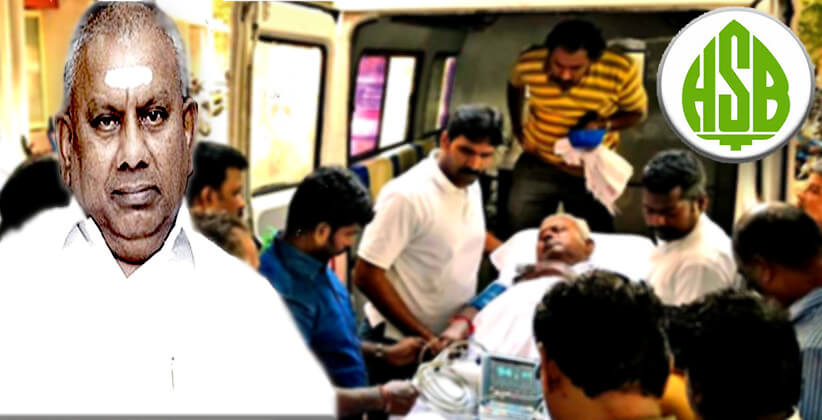 Hours after P. Rajagopal’s last-ditch effort to skip incarceration was rejected by the Supreme Court, the owner of Saravana Bhavan hotels surrendered before the IV Additional Sessions court in Chennai on July 9, 2019.

In a bid to evade surrender, Rajagopal had gotten himself admitted in a hospital on July 4, 2019. Later, he approached the apex court seeking an extension citing health reasons. However, the Supreme Court gave no relief and ordered Rajagopal to surrender immediately. Left with no other option, Rajagopal, convicted in a murder case surrendered himself. He came to the Chennai court in an ambulance from Vijaya Hospitals in Vadapalani. He will be lodged in Puzhal prison.

In March 2019, the Supreme Court had upheld the life imprisonment sentence earlier awarded to him by the Madras High Court.

The case against Rajagopal dates back to 2001 when his henchmen kidnapped and murdered Prince Santhakumar when he was on his way to Tiruchendur with his wife Jeevajyothi. Santhakumar’s body was found in Kodaikkanal. Rajagopal was interested in marrying Jeevajyothi and take her as his third wife based on the advice of his astrologer. However, Jeevajyothi had turned down all his advances and married Santhakumar, whom she had fallen in love with.

Despite Jeevajyothi’s resistance, Rajagopal continued to pursue her even after her wedding. When she threatened to seek the help of the police, Rajagopal had told her that he would manage the police with his money power and continued to harass the couple.

In 2004, Rajagopal was found guilty and was sentenced to 10 years rigorous imprisonment. He moved the Madras High Court against the verdict, which enhanced the punishment and sentenced him to life in prison. Subsequently, he appealed against this order in the Supreme Court which, in March 2019, upheld the decision of the High Court.