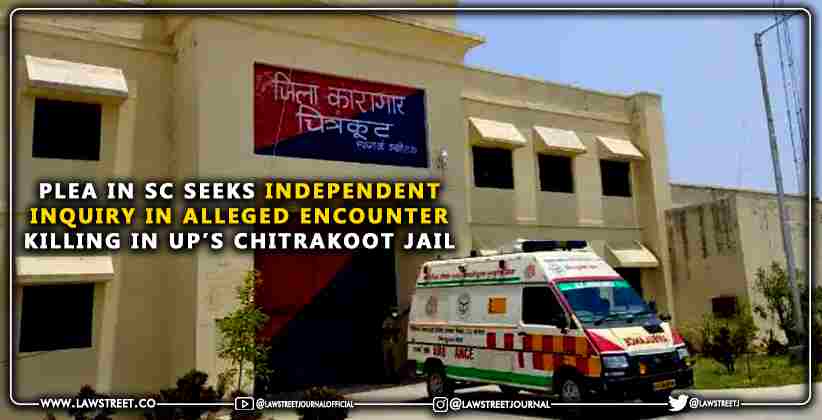 A petition has been filed before the Supreme Court ordering an independent inquiry by The Central Bureau of Investigation (CBI) or National Investigation Agency (NIA) into the alleged killing of three under trial prisoners at the Chitrakoot jail in UP.

On May 14, 2021, 3 under trial prisoners, including a member of BSP MLA Mukhtar Ansari’s group was shot dead inside a Chitrakoot district jail. The three inmates gunned down were identified by police as Anshu Dixit, Merazuddin Alias Meraj Ali and Mukeem kala, belonging to Sitapur, Ghazipur and Shamli district respectively.

The petition was filed by Supreme Court lawyer Anoop Prakash Awasthi, who further sought direction for a probe into all alleged extra judicial killing that have been taken place in Uttar Pradesh after March,18 2017 with special reference to those killing done under direct order of Chief Minister Yogi Adityanath.

The Petition alleged that CM Yogi Adityanath has openly promoted the culture of Encounters and extra judicial killing in Uttar Pradesh and went on to say that ‘Police in Uttar Pradesh will now respond to a bullet with a bullet’.

The Plea cited the Killing of Munna Bajrangi who was shot dead in Bagpat jail in Uttar Pradesh, and Vikas Dubey encounter last year is not a stray incident and there have been several hundred encounters in Uttar Pradesh since 2017, which is ‘not only alarming but equally disturbing.’

‘Chief Minister, who is provincial head of an elected government encroached upon the domain of punishment in sanctioning the taking of life in encounter without following the due process of law,’ the petitioner alleged.

Further the petitioner stated that the CM reportedly announced in the UP state assembly ‘apradhiyon la thok diya jayega’ completely set down the ideals of separation of power intertwined in basic structure of the constitution and fundamental right to life under article 21.

As per petitioner, in Indian system a life can be taken only through the ‘procedure established by law’ by following due process through our judicial machinery prescribed in the constitution.

‘It is interesting to note that in a video which is circulating in the media said Anshu Dixit is seen saying about the plan of Jail authorities to kill him by some means through STF,’ awasthi plea said. The plea added that it is further astonishing to find that the two other killed inmates namely Merazuddin and Mukeem Kala were transport to Chitrakoot jail only recently on March 20 and may 7 respectively purportedly as ‘part of larger design behind the shootout’.

According to the petitioner, the biggest concern of this extra judicial killing is gone unchecked, then the life of any citizen can be taken anytime by the state agencies.

The plea reads, ‘any enmity or private dispute or Quest of settling private score may lead to filing of few criminal cases in some police station against the undesired person, branding him a dreaded criminal within days, to be taken into custody as under trial, and fellow may be eliminated by being shot anytime, anywhere by the police/ law enforcement authorities on any false Pretext like attempt of snatching a rifle or pistol of fellow police personnel during transportation or even inside the jail.’

Plea stated that Prisoners are being executed on excuses like firing by dead, snatching of Pistol, constitution, fundamental rights, human rights and this culture of violence and harassment being promoted in UP militates against the basic notion of very rule of law where violence has been collected Enterprise to portray the authority of Government and obscure its failure.