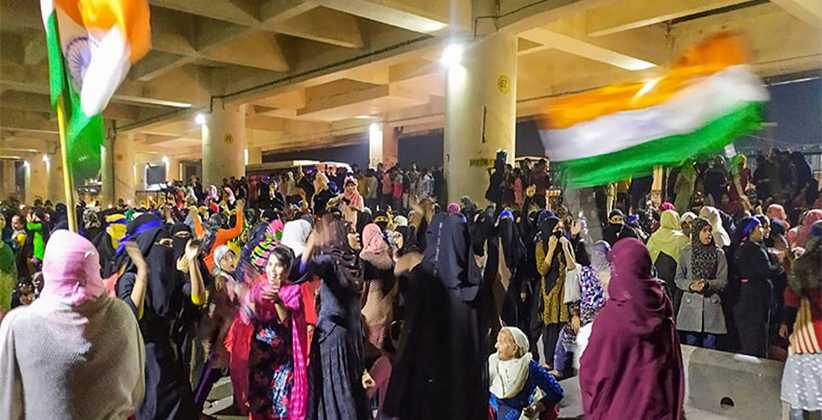 At night of February 22, 2020 (Saturday) around 500 women while chanting slogan ‘Azaadi’ came and blocked the Arterial road near Jaffrabad Metro Station to protest against Citizenship (Amendment) Act, 2019 (CAA) and National Register of Citizen (NRC). Crowd in protest is continuously swelling since Saturday’s night. Till Sunday morning, protest strength has reached around 1500 women and around 500 men.

Seeing protest Deputy Commissioner of Police (DCP) Ved Prakash Surya has augmented security by deploying more police personnel in the area. Delhi Metro Rail Corporation (DMRC) has also closed entry and exit point of Jaffrabad Metro Station, as per information given by tweet by DMRC on Sunday morning. DMRC also informed train will not stop on the Jaffrabad Metro Station.

People in the protest demanded that government shall repeal the impugned act otherwise they will continue protest until government do so. They have blocked Arterial Road which connects Seelampur to Maujpur and Yamuna Vihar. The protesters are also supporting nationwide strike call by Bhim Army chief Chandrashekhar Azad, who is leading demonstrations today over the Supreme Court order, which said that "quotas and reservations for promotions for government jobs is not a fundamental right".

This is the latest anti-CAA sit-in led by women in the national capital after Shaheen Bagh - the epicentre of demonstrations against citizenship law - inspired similar agitations across the country. A key road connecting the national capital to Noida, which was closed due to the anti-CAA protest at Shaheen Bagh, reopened for 40 minutes yesterday (February 21, 2020) after 70 days.

Protesters say the CAA which fast tracks citizenship for illegal non-Muslim migrants from Afghanistan, Pakistan and Bangladesh is unconstitutional, divisive and discriminatory because it makes religion a test of citizenship.

The protest at Jaffrabad began even as efforts are on to clear a road blocked by anti-CAA and anti-NRC protesters at Shaheen Bagh in Southeast Delhi for over two months.

The freedom to assemble peacefully is a fundamental right according to Article 19 (1) (b) of the Constitution of India, 1949. Though such protests require prior permission and a no-objection certificate (NOC) from the police. There are few designated places where conducting protest is allowed like in Delhi peaceful protest can only be held at designated place like Jantar Mantar or Ramlila ground.

If prior permission or NOC is not obtained then following act of blockade by protesters might attract charges of sedition under Section 124A of Indian Penal Code, 1860 on grounds of disturbing ‘public order’.