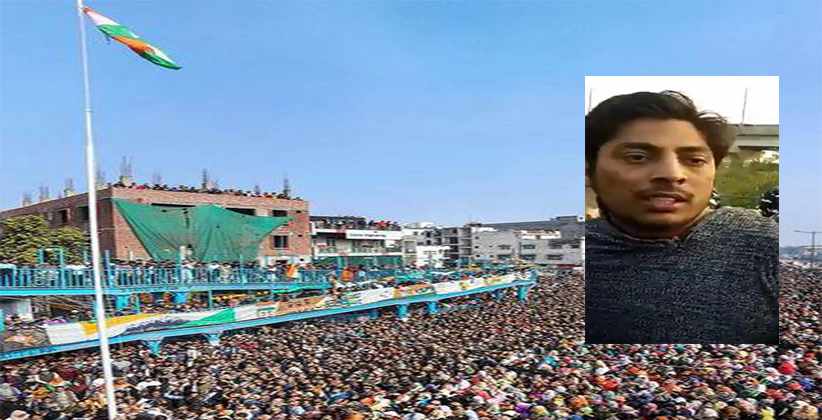 Delhi'd Shaheen Bagh yesterday (February 1, 2020), witnessed the second daylight shooting in the city during an anti-CAA protest, around 4:53 pm. This incident took place at the epicentre of protests just three days after a teen shooter had fired shots at the protestors near Jamia Milia University. The initial police interrogation reported that the man to be identified as Kapil Gujjar, a Class 12th dropout, resident of Dallupura village in East delhi, in neighbouring Noida, Uttar Pradesh who has denied being associated with any group. He told the police that he was angry at the continuous protests and wanted to only scare them.

The man allegedly shouted "Jai Sri Ram (hail Lord Ram)" as he fired shots at police barricades put up at the south Delhi locality where hundreds of women and children have sat on the road in protest for more than a month. He was also heard saying: "Humare desh mein sirf Hinduon ki chalegi aur kisi ki nahi (in our country only Hindus will prevail)."

It has also been told that the alleged shooter threatened Shaheen Bagh protesters, warning them to vacate the premises where they have been holding a protest against the Citizenship Amendment Act, 2019 (CAA) and the National Register of Citizens (NRC) since December, 2019 opened fire behind the stage at the site of the protest.

Following the incident, there was immediate panic and anger all around the protest site, which is likely to remain chaotic for over a month. The police immediately detained the man and took him into custody. However, there are no reports of injuries so far following the Shaheen Bagh incident.

Police officer Chinmay Biswal said the man had fired shots in the air. "The man had resorted to aerial firing. Police immediately overpowered and caught him," he said.

A witness said the man fired two times from his country made pistol standing right next to the police. "When his gun jammed, he ran. He tried to fire again, then tossed the gun into the bushes and tried to escape. Some of us and the police caught him, the police dragged him away," he added

The shootings come around a week before Delhi voters decide an assembly election that's largely shaping up to a contest between the Bhartiya Janta Party (BJP) - some of whose leaders have faced temporary campaign bans for targeting anti-government demonstrators in public remarks - and ruling Aam Aadmi Party (AAP).