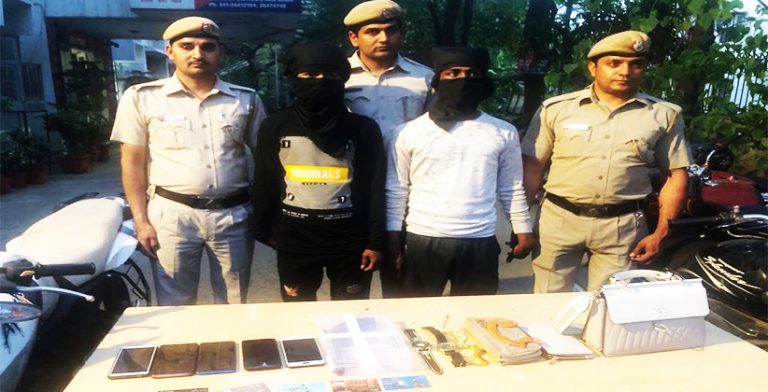 Taking the gravity of such cases on the rise, a special Anti-Snatching team led by SHO Amar Colony inspector Anant Gunjan with SI Ishvar Singh and HC Ramprasad with others was constituted under the supervision of Govind Sharma ACP sub-division Kalkaji. The patrolling in the area was stepped on and the pickets were mounted up. All the suspected bike riders in the area were duly verified.

Following a tip-off, a trap was laid near National Heart Institute, East of Kailash. The police team erected a picket and started vehicle checking. Three persons were seen riding on a white colour Apache motorcycle. The police team flagged them down, they speed up instead of stopping and even tried to flee the scene. However, the alert picket staff apprehended the riders at the picket. When verified it was found that the Apache motorcycle was found stolen from PS Sangam Vihar vide FIR no. 11846/19, under Sections 379 and 411 of the Indian Penal Code, 1860.  Accordingly, a case vide FIR No. 114/19, under Sections 25, 54, 59 and 411 of the Indian Penal Code, 1860, was registered at PS Amar Colony. "When interrogated, they are found to be addicted to drinking and smoking cannabis, in order to feed their addictions they took to crime. The accused Sunil Negi was previously arrested in 23 and Nagender in 13 cases of theft, snatching and robbery. They basically used stolen bikes to commit crimes. They used the weapon to frighten the victim in case of protest or resistance," District Police chief Chinmoy Biswal spoke.

Crime, Police And Law Sep 27, 2020 Upendra Malaviya ( Editor: Ekta Joshi ) 2 Shares
2 Shares
The Delhi Police has issued more than three lakh Challans between June 15 and September 23, 2020, for violation of Pandemic norms in the National Capital, A total of 3, 54,944 challans have been issued within the said period. It happened after the Delhi Lt Governor Anil Baijal had empowered health, revenue, and police officials to impose fines up to Rs. 1,000 for violations of norms, including non- observance of quarantine rules, non-maintenance of social distancing, not wearing a face...
Read full post

Judiciary Sep 18, 2020 Neha Bharti ( Editor: Ekta Joshi ) 161 Shares
161 Shares
On September 16, 2020, Supreme Court while hearing the SLP in the case of Paramveer Singh Saini v. Baljeet Singh and Ors, directed the Chief Secretary of each State and Union Territories for a report to find out the exact position of CCTV cameras in each Police Stations and also the constitution of Oversight Committee which is in accordance with the order passed by the Supreme Court in the case of Shafhi Mohammad v. State of Himachal Pradesh dated 03.04.2018.  In Shafhi Mohammad v....
Read full post