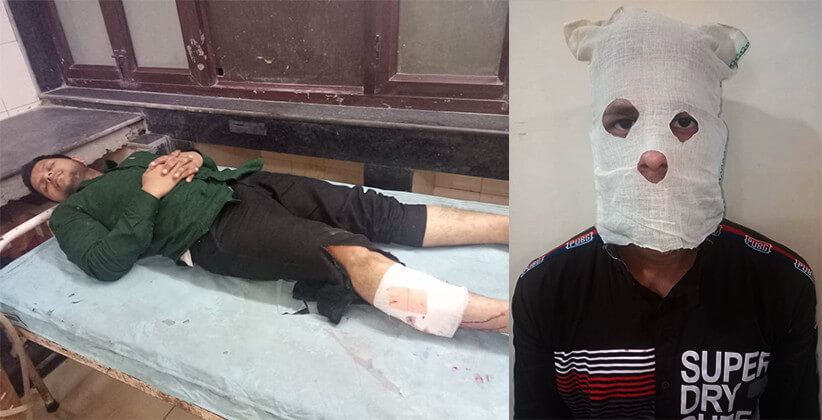 In the wee hours, Special Cell overpowered two dreaded gangsters after a short exchange of fire. The gangsters nabbed were identified as Salman alias Munna 24 years and Nazim 23 years, Salman who sustained a bullet injury in the leg, rushed to Babu Jagjiwan Ram Hospital, Jahangirpuri.

Anil Chadha Head Constable bore the brunt of the bullets fired by the criminals on his bullet proof jacket.

The police recovered two semi-automatic pistols of .32 bore with 5 live cartridges with one Apache motor cycle used at the time of the shootout. It's reported that about 8 rounds were fired by both the gangsters, 6 rounds were fired by the police team in retaliation, 14 bullets were fired in toto. They are believed to have been involved in gangwar in North-East District of Delhi.

Salman and Nazim carried a bounty of rupees 1 lakh and 50,000 respectively on their heads declared by Delhi Police.

In the recent past, Hakimuddin, brother of notorious criminal Rehan alias Gullu was shot dead in the area of New Usmanpur on March 31 this year. They with their other accomplices pumped more than 8 bullets into his body.

In another incident on April 5 this year, Sarafraz of Kanti Nagar in Krishna Nagar was shot dead by Salman, Nazim and his aides.

A team of Special Cell Southern Range led by Inspector Shiv Kumar under the supervision of ACP Attar Singh has arrested two highly dreaded criminals of Nasir gang at about 4am on June 7, 2019, near Pusta Road, near Kali Mata Mandir, Mukhmailpur, Delhi after a brief exchange of fire. They share the list of Most Wanted in Delhi.

"We had been tracking down the hardened criminals operating in Delhi and the NCRs. Inspector Shiv Kumar had deputed his team to gather information about these two criminals. Their hideouts were closely monitored. After a long hunt they were nailed. Acting on a tip-off, that two desperate associates of Nasir gang Salman alias Munna and Nazim well equipped with firearms would come to Pushta road near Kali Mata Mandir, Mukhmailpur, Delhi in the wee hours on an Apache motorcycle to meet one of their contacts and to plan to eliminate one of their rivals. Immediately, our team led by Inspector Kumar rushed to the given spot. When they were signaled to stop and surrender, they instead whipped out their pistols and opened fire on the police team. One bullet hit the BP jacket of our HC Anil Chadha. We returned the fire that brought them down to their knees. One of the two who sustained the bullet injury is stated to be out of danger. We have recovered weapons used in the shootout. The case has been registered under relevant sections of Indian Penal Code and further probe is underway," Pramod Kushwaha DCP Special Cell spoke.

It further revealed that they killed one Hakimuddin at close range when Hakimuddin with his son was returning home. They pumped 8 bullets into the deceased. Hakimuddin was brother of Rehan alias Gullu who is an associate of Irfan alias Chhainu, a notorious criminal. They both again killed a 28-year-old man Sarfaraz in the area of Kanti Nagar near Krishna Nagar Delhi. Sarfaraz was suspected by them to be a sympathizer of Gullu and he also used to provide financial and other logistic help to him. The gang rivalry in the Northeast district has been going on the bloody turf for more than 10 years and has so far taken more than 35 lives in this connection.

HOW THIS GANGWAR IN NORTHEAST DISTRICT BEGAN IN 2011

It started way back in 2011 when one Atif was killed by Irfan alias Chhainu, Akil Mama, Wasim and Akil Don about 9 years ago. Atif had an affair with the daughter of one of the acquaintances who sought help from Chhainu to eliminate Atif. Later on, one Matin Ahmad was killed by Nasir, Imran and other associates. The follow-up ended shooting dead Akil Mama and Akil Don in the year 2015. Javed, brother of Akil Mama was also shot dead by a rival gang. Qamar, brother of Mumtaz associated with Chhainu gang was killed by Nasir gang. In the year 2015, Nasir got Chhainu attacked while being produced in Karkardooma court. The members of Nasir gang indiscriminately opened fire in the court in which a Delhi Police head constable died.

​In October 2017, Wajid was shot dead by Anwar Hatela (Chhainu gang). On the same day, Arif (Nasir gang) was shot dead by Anwar Hatela and his associates. Anwar Hatela had also killed 3 members of Nasir gang in Amroha in the year 2017. In the year 2018, Anwar Hatela fired upon a team of Special Cell led by Inspector Shiv Kumar in Amroha. In exchange of fire, Anwar Hatela got injured in both legs. The same team also arrested dreaded Asif in the year 2018 after a brief exchange of fire. In the year 2018, Riyaz Handa and Rizwan were tasked by Chhainu with attacking Nasir but both were arrested by the same team of Special Cell. Criminal activities of both the above gang members have been contained after invoking provisions of MCOCA against members of these gangs and this has really helped to contain their violent criminal activities to a great extent curbing crime.

More than 20 members of both the gangs are lodged in jails.