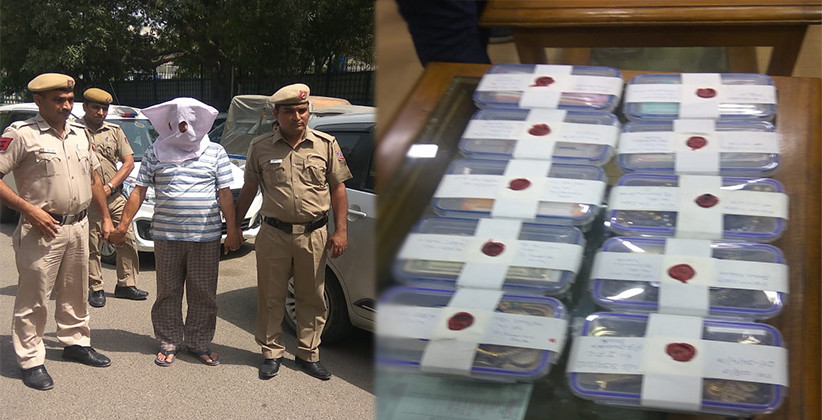 Made friends on the social site, the friendship blossomed over a period of some time and ended in murder. The police of the district claim to have solved a case of murder and robbery of a woman, and recovered the cash, gold and diamond jewellery pieces worth rupees 50 lakh robbed at the house of sector 7 Dwarka and the car Maruti Dezire RJ14YC 2774 used in the commission of the crime, spotted at her residence in Dwarka south. This joint operation was carried out by the Special Staff of the district and the PS Dwarka.

The killer identified as Dinesh Dixit 55 years from Rajasthan's Jaipur city befriended with the deceased Meenu Jain gradually, executed the crime with an eye to taking away gold ornaments.

Probe, in the beginning, indicated friendly entry, besides a thorough search of social networking sites like FB account and WhatsApp chats was made.

The CCTV cam footage at the gates was checked and it was learnt that a suspicious vehicle Maruti Swift Dezire ZDI+ white colour bearing number plate DL-07AW-8973 having peculiar dent near the rear bumper on the driver side had entered the residential complex with the permission of the deceased.

Delving deeper into the CCTV footage, the exit-entry of this suspicious vehicle was seen from the front gate at about 8:45 PM and again an entry from 9:15 in the evening. Later, this vehicle had left the complex around 5:21 in the morning. Later on, during the course of investigation, it revealed that the suspected vehicle was bearing a fake number plate. The police zeroed in on the modal number of the suspect vehicle and a raw data from the company regarding the suspect vehicle was taken and analyzed.

The Google map time line of the deceased was found activated and the same also corroborated with the journey of the deceased to Janakpuri, Delhi. The CCTV footage from the Toll gates of Kherki Daula was analyzed. The suspected vehicle was seen crossing the Toll gates towards Jaipur, Rajasthan in the morning. Later, next Toll gate of Shahjahanpur was also checked and suspected vehicle was again seen crossing this Toll gate. The CDRs of the victim having contacts of Rajasthan mobile phone numbers were analyzed and the same was compared with the suspected vehicle data.

"The team raided in Sikar, where this suspect vehicle was registered but the vehicle was not traced. Later, as per CDR, the team reached Jaipur, Rajasthan where one mobile phone from the contact of victim was found registered. Later on, the vehicle was seen parked near Skyway Apartment, Kedia Road, Jaipur, Rajasthan. On inspecting the vehicle suspected dent mark near rear bumper was seen. The team laid a trap and nabbed a person who when interrogated confessed to the crime. Dinesh Dixit came to Delhi to meet the victim and both of them took lunch together and the accused made the deceased drink alcohol and on finding her unconscious, he gathered all valuable, money and jewellery and mobile phones from the house. He then smothered her and fled," Anto Alphonse DCP Dwarka spoke briefing the press.

Further investigation of the case is underway.