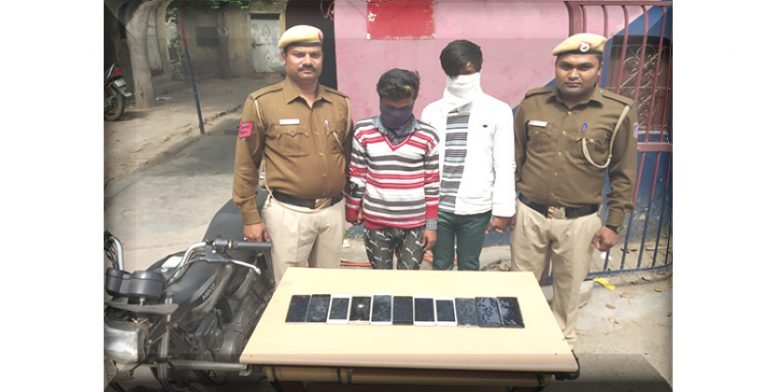 With the arrest of two snatchers, the south-east district police's Special Task Force has claimed to have solved five cases of snatching filed under Sections 356 and 379 of the Indian Penal Code, 1860.

A team comprising SI Nanak Chand, ASI Kripal with others led by inspector Mukesh Minha under the close supervision of Jagdish Yadav ACP Operations was constituted.

The team kept a vigil on the movements of those jailbirds lately out on bail or parole. The police sleuths in civvies were deployed at various points where they were expected to strike. The team gathered information and laid a trap at Maa Anand Mai Marg near Crown Plaza Hotel. A Hero Splendor motorcycle was seen coming from the MB Road side and was going towards Kalkaji Mandir. The police team signalled the bike rider to stop the bike but on seeing the police team, the rider sped up the bike. However, the alert staff intercepted the bike and the rider with one was caught. On recovery of stolen mobile phones, the police arrested them under Section 41(1)(d) of the Code of Criminal Procedure, 1973.

During sustained interrogation, accused persons disclosed that they both are childhood friends and live in the same locality. Both accused persons are school drop-outs and are addicted to liquor. Accused persons used to work as unskilled labourers in the industrial area. In order to meet their needs, the accused got into the crime. "Accused Shahabuddin used motorcycle and targeted the pedestrians and persons riding in the TSR-Auto. They used to specifically target victims, talking on their phones. Shahabuddin used to ride the bike and co-accused Arvind Kumar used to snatch the mobile phones of the victims. They disposed of those mobile phones at cheap prices to passersby and other labourers. The case has been registered and the probe is initiated," Chinmoy Biswal DCP south-east district spoke.