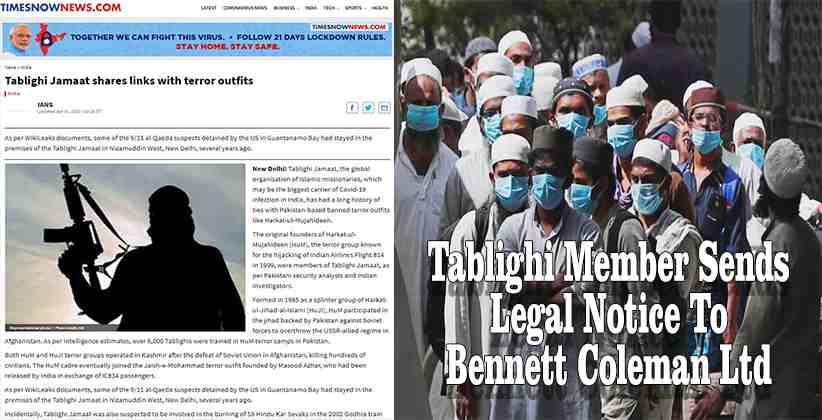 Not only did a Jamaat member serve defamation notice of a whopping amount of Rs. 1 crore to Times of India but Jamiat-Ulama-e-Hind also reached Supreme Court against the fake misleading news being run by several Indian media houses.

A Bangalore based Tablighi Jamaat member has issued legal notices to five media outlets, including the BCCL, the parent body of Times of India and Times Now, demanding immediate withdrawal of a defamatory article that linked the Jamaat to terror outfits. The article that was published on the Times Now website on April 1, 2020, states that Jamaat has ties with Pakistan based Harkat ul Mujahideen, al Qaeda and Lashkar e Taiba, among others.

Advocate Razvi said that the legal notice, demanding immediate withdrawal of defamatory articles and compensation of one crore Rupees has been already sent through email to the media organisations and the people concerned and a hard copy of the same will be mailed to them as soon as the lockdown is lifted.

Stating the reasons behind the legal notice, the questions that, “We have not yet addressed the misinformation spread involving the COVID-19 allegations and the Tablighi Jamaat members. We will be issuing separate notices to the government and concerned authorities apart from media outlets for the allegations made since another client has approached us to take strong action against the same. How can you deny the right to privacy of these patients and how could the authorities be so nonchalant about it?”

The legal notice states that "Tablighi Jamaat is one of the largest Islamic movements in the world that works with the Muslim community to increase their awareness regarding the basic principles of Islam and Prophetic traditions and to enable Muslims to live as honest and responsible citizens of the countries they live in.”

Stating all the permissions for the programme to be valid it stated that, “The organization has always cooperated with the authorities and has had absolutely no run-ins with the law in over 100 years of its existence. All its members are law-abiding citizens and the Jamaat neither encouraged nor supported and has opposed any violation of law by any person of the organization”.

The notice states that the allegations in the Times Now article that the Jamaat has had a long history of association with Pakistan based outfits like Harkat-ul-Mujahideen (HuM) are “baseless and malicious". The notice stated that "This is a baseless and malicious allegation as the Tablighi Jamaat has never been the subject of any investigation for any connection to terror activities. This again is a malicious attempt to link the Tablighi Jamaat to the HuM... the Tablighi Jamaat not only has no relation with any terror organization but unequivocally condemns all acts of terror across the world with harshest possible terms.”

Therefore, it asked for an "unconditional apology" and the sum of Rs. 1 crore "for the horrible mental agony caused". The notice added that a separate case would be filed for criminal defamation.

The Jamaat has been in the centre of a media storm after it hosted an event in Delhi between March 13 and 15, which became one of the hotspots of coronavirus in India.