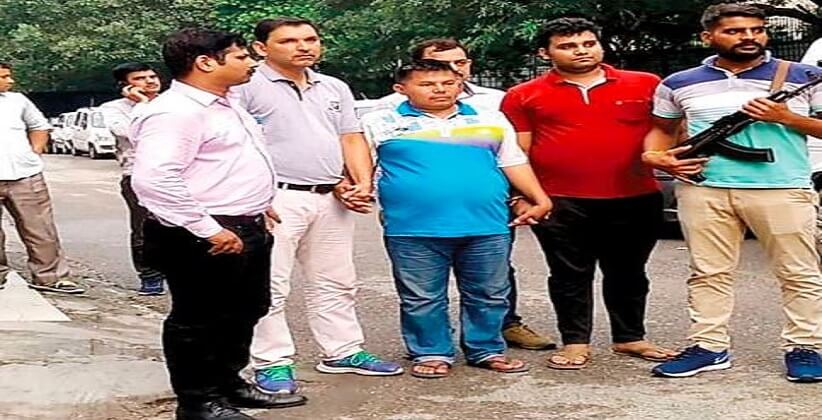 A team of South-Western Range, Special Cell under the supervision of Sanjay Dutt, ACP apprehended Oinam Ibochouba Singh on Tuesday (August 28th, 2018) from South Delhi’s Kotla Mubarakpur. He is involved in many terrorist activities and extortion cases in Manipur and was trying to set up a base in Delhi to carry out anti-national activities. As per police, an incriminating material has also been seized from his possession.

Over an input received from Manipur police that Oinam Ibochouba Singh is involved in terrorist activities and presently hiding in Delhi, a team of Special Cell started working to catch him.

During the development of the input, it was learnt that the wanted accused was based in Nepal near the Sonouli at the Indo-Nepal border. It was also learnt that there, he along with his associates are in the process to set up a base in Delhi to carry out anti-national activities. In order to further develop this input, sources were deployed in certain areas especially inhabited by North Eastern people in Delhi.

On August 28, 2018, a specific information was received that Oinam Ibochouba Singh is coming to meet his associate at Kotla Mubarakpur, Delhi. Accordingly, a trap was laid at certain points which led to his arrest by the Special cell team near Arya Samaj Mandir, Kotla Mubarakpur, Delhi. A case under appropriate sections of law has been registered at PS Special Cell, Lodhi Colony, New Delhi.

In order to evade arrest from Manipur police, he escaped to Nepal and set up his base at Syangja bazaar area in Nepal. He extorted money from different Government authorities, the local businessman, private schools etc. by sending them threatening demand letters through ‘Over Ground Workers’ (OGWs) in Manipur. Those OGWs based in Manipur used to collect extortion money from the victims and then distribute the money between different offices of the banned outfit. He came to Delhi for an alternative base in and around Delhi region for better coordination of his criminal activities and to raise funds to procure arms and ammunition.

Recently, he circulated a threat audio message in social media groups in which he threatened that if the leadership of Chief Minister of Manipur N. Biren Singh failed to resolve the issues within one month, the Chief Minister along with other ministers will be targeted and killed. He also claimed to issue termination orders of present officials of Manipur University including Vice Chancellor A P Pandey, to his subordinate cadres of Red Army KCP (PWG).