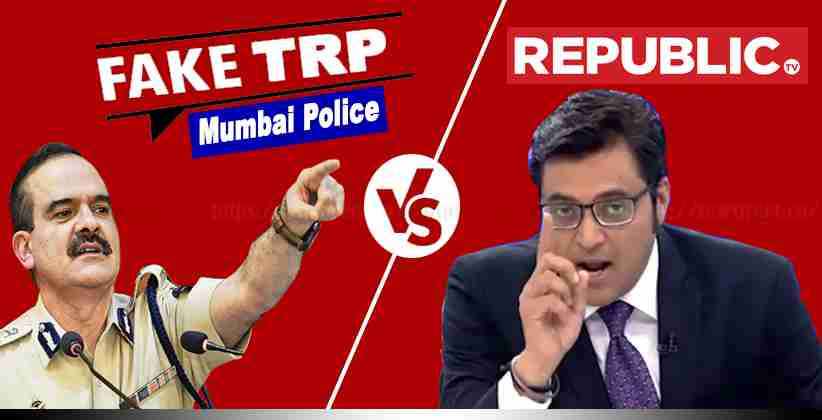 The Mumbai Police Commissioner, Param Bir Singh has mentioned that the police are predicting a scam that involves the manipulation of TRPs in three television channels. The Commissioner informed the reporters that a national TV news channel, was facing a lot of criticism for attacking over Mumbai police and Maharashtra government for the Sushant Singh Rajput suicide case was involved in the TRP racket.

The commissioner was silent on naming the news channel but as per the reports, the channels which were supposedly involved in the scam are Republic TV, Fakt Marathi, and Box Cinema. These three news channels are alleged to be involved in altering and distorting the systems used by the Broadcast Audience Research Council (BARC) to increase their TRP by malafide means.

TRP is one of the tools or measures to judge which TV program or show is being viewed the most and indicates the viewer’s choice and popularity of a particular channel. The TRP is calculated by a confidential set of households on the basis of the TV channels they usually watch on a regular basis.

A spokesperson from BARC informed that “as in all our previous cases of suspected panel homes intrusions, BARC India still continues to follow its established vigilance and the disciplinary guidelines. BARC has remained consistently true to its purpose and accurately and faithfully reported: “What India Watches”. BARC India has praised the efforts taken up by Mumbai Police and has promised to cooperate and provide support to them if asked for.”

BARC India had filed a complaint in the matter where 4 people have been arrested, two of them are from Hansa Research Group and the other two are from Fakt Marathi and Box Cinema. The Detection Crime Branch of Mumbai Police was the first one to dig up the alleged racket of increasing the TRPs and had detained the two owners of two Marathi channels for manipulating viewership ratings as claimed by the Commissioner, Param Bir Singh.

The commissioner further commented that the national news channel that is involved in the TRP racket and all other persons whomsoever is responsible for this manipulation will be arrested irrespective of whether anyone is director, promoter, or any employee of the channel. The police are even probing the bank accounts of these channels and the people alleged for the manipulation are being summoned by the Police for further investigation of the case.

The accusations alleged over Republic TV are being entirely disapproved by the channel and the channel has averred that they are going to sue the Mumbai Police Commissioner for defamation and damages. Later, the CEO of Hansa Research, Praveen Nijhara has issued a statement and read, “This is with reference to the media reports regarding the TRP ratings being manipulated. Hansa Research and BARC further conducted an investigation into the matter over the last few weeks, the conclusion of the meeting was that Hansa Research was filing an FIR against an ex-employee who was alleged to be involved in the wrongdoing.”

The CEO further stated, “Hansa Research has always been vigilant about these issues and has been proactive in informing BARC and the law enforcement agencies as and when any such matter comes into light. We would continue to cooperate with BARC and with the authorities as and when called upon to do so.”

Thus, these channels have clearly disapproved of the claims of the Mumbai Police, but one can know further only when the charge sheet is filed with all the evidence, in fact, the Police are contending that there might be other arrests too while the investigation proceeds further.