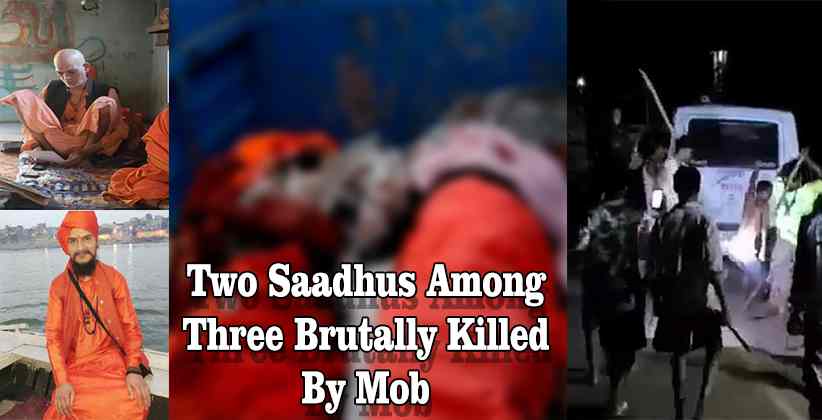 A mob in a small village in Maharashtra’s Palghar district which is 125 kms from Mumbai killed three people including 70 year old and a ‘rumour’ was the reason behind the killings. The rumour stated that three people are reported to have been kidnapping children for trafficking organs and these three people were considered as the suspects and were attacked by the locals with planks and iron rods which led to their death by the time they reached the hospital.

They were attacked by the crowd when they were on their way to Mumbai from Nashik to attend a funeral. The mob also attacked the police team which came to rescue the three men. Their car was stopped by the crowd and were violently pulled out of the car and then brutally beaten to death.

Among the three killed, two were sadhu and one was the driver of the car they were travelling in. Reportedly, the police was outnumbered on the spot by the crowd and they failed to save the lives of the three-men from the mad crowd. Till now police have arrested about 110 people and an investigation has been ordered into the case.

The three men killed are Sushil Giri Maharaj, Jayesh and Naresh Yalgade who are the resident of Kandivali, Mumbai. They were travelling to Nashik to attend a funeral but on their way, they were stopped by the crowd of village Gadchinchale, a village where the rumours about a gang which kidnaps children and sells their organs were circulating for last few days.

Though there were rumours about child thief gang in the village, the police doubt that the intensity of attack carried by the crowd against the 2 sadhus and their driver shows that they were determined to kill the three people. An investigation on the matter is on the way and police is working on all the angles possible in the case and the real motive behind this mob lynching.

In one of several videos of the assault, a man can be heard shouting "Oye, isko maro (Hey, hit him)" and the 70-year-old victim can be seen, surrounded by an armed mob and bleeding badly from his head, begging for his life as cops try to control the situation. A second shows dozens of villagers systematically breaking the glass windows of a police patrol vehicle. Yet another shows the vehicle rolled over with the windshield shattered. The video shows no intervention by the cop

"The police reached the spot and when they put the victims in the police car, the mob attacked them again. Policemen have also been injured in the incident. The officers managed to bring them to the hospital, but they died. We are investigating the incident and 110 people have been taken into custody," Kailash Shinde, the District Collector, said. "I want to appeal to everyone to not believe in rumours. No one is coming to steal from your village or take your child's kidneys. Villagers have taken the matter into their hands and we will take necessary action," he added.

Former Maharashtra Chief Minister Devendra Fadnavis condemned the mob attack. "Seeing the visuals that have come out, Palghar incident of mob lynching is shocking & inhuman. It is more disturbing especially when we are going through such tough times otherwise too. I urge the State Government to immediately set up a High-Level Enquiry and ensure that people who are responsible for this are brought to justice at the earliest," he tweeted.

Police have said there were rumours of thieves taking advantage of the nationwide lockdown to break the chain of transmission of the novel coronavirus.

"Nobody guilty in this heinous crime and shameful act will be spared and they will be brought to justice in the strongest way possible," he said.

The police have reportedly registered a case under Section 188 (disobedience), Section 302 (murder) of the Indian Penal Code, 1860 (IPC) and Disaster Management Act, 2005, and Epidemic Diseases Act, 1897.

Six policemen were also injured in the whole incident as the crowd pelted stones at them, the incidence took place at a road 30-35kms away from the police station where no policeman was posted.