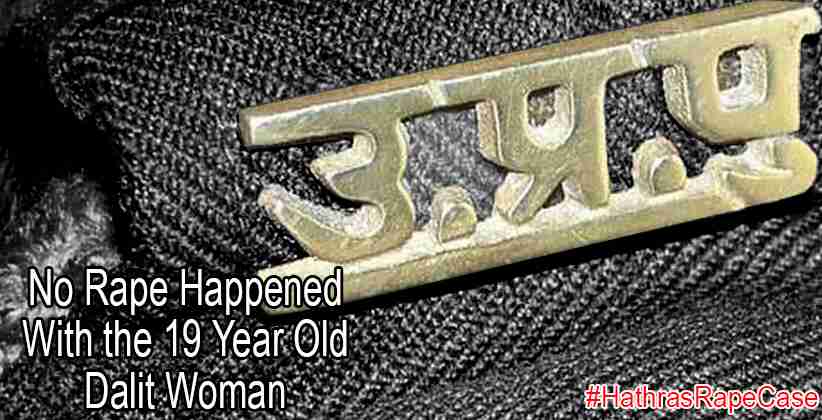 A senior official of Uttar Pradesh Police said in a press release that the Forensic Science Laboratory result did not show the presence of semen in the body of the deceased woman. UP Police claimed that no rape happened with the 19-year old Dalit Woman of Hathras.

ADG Prashant Kumar said, “The report of the FSL has also come. It says clearly that samples did not have sperm. It makes it clear that there was no rape or gang rape”.

The ADG also claimed that the woman in her statement to police “did not mention rape but talked about “marpeet” (beating) only”.

By giving such statements, the police attempted to contradict the dying declaration given by the victim on September 22 that she was raped by four men.

Various Law officers also debunked the theory of police, claiming that presence of semen is not necessary to constitute that rape has committed or not.

Even it is imperative to note that to prove the offense of rape it is not necessary to establish the presence of sperm samples in the body of the woman.

Senior advocates Rebecca John and Vikas Pahwa told PTI that the absence of semen on the body of alleged gang-rape victim claimed by the police cannot prejudice the prosecution of accused persons for the offence as there was a dying declaration that cannot be discredited.

The Supreme Court also time and again adjudged that presence of semen in the body of the victim is not necessary to constitute rape.

“…to constitute the offence of rape it is not at all necessary that there should be complete penetration of the male organ with the emission of semen and rupture of the hymen. Even partial or slightest penetration of the male organ within the labia majora of the vulva or pudenda with or without any emission of semen or even an attempt at penetration into the private part of the victim would be quite enough for the purpose of Section 375 and 376 of IPC. That being so it is quite possible to commit legally the offence of rape even without causing any injury to the genitals or leaving any seminal stains”.

Recently, Karnataka High Court held in State v. Arumugam Govindaswamy and others (2017), that it is possible to commit the offence of rape without leaving seminal stains.

The Dalit woman's body was cremated by the police in the wee hours of September 29 against the wishes of her family. The victim’s family complained that they were not allowed to perform her last rites and were forcibly locked up in their home by the police during the cremation.

Advocate Who Acted Professionally as Per Client's Instruction Cannot Be Made Criminally Liable for Defamation: Madras HC