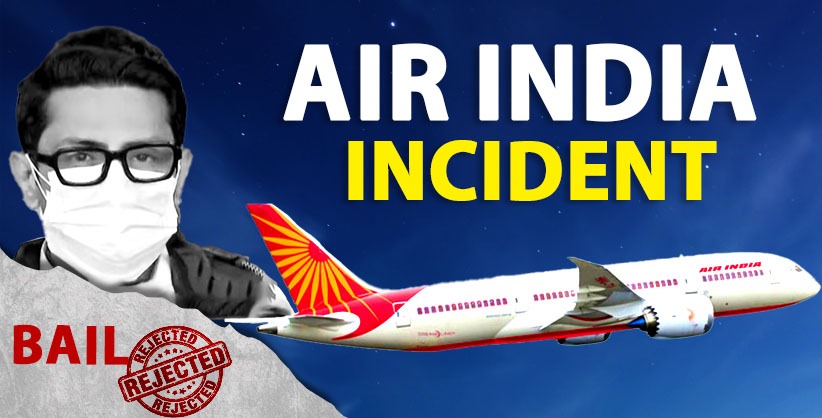 NEW DELHI: A Delhi Court on Wednesday rejected a plea for bail by Shankar Mishra, accused of relieving himself upon an elderly woman in an Air India flight, as his alleged act was "utterly disgusting and repulsive" and was "sufficient to outrage the modesty of any woman".

"Egregious conduct of the accused has shocked the civic consciousness and needs to be deprecated," Metropolitan Magistrate Komal Garg said.

The judge said the court does not find it appropriate at this stage to release the accused on bail.

The court also noted as per the allegations, the accused was voluntarily drunk and had consumed alcohol during the flight and the said fact has not been denied by the applicant.

The alleged act in itself prima facie reflects the intention of the accused, the court added.

The judge also said the accused had failed to join the investigation even after notice under section 41A CrPC being issued to him and he was arrested only upon the execution of NBW.

"Therefore, the conduct of the accused does not inspire confidence," the court said.

The judge also pointed out it has also come on record that accused has tried contacting the victim and the possibility of accused influencing the witnesses cannot be ruled out.

Further, as per the report of Investigating Officers, the other witnesses are yet to be interrogated and the investigation is at a very initial stage, she noted.

Mishra was arrested from Bengaluru on January 6. As he was produced here at Patiala House Courts, the judge had denied the police custodial interrogation of the accused.

Mishra was also sacked from the post of Vice President of American financial services company Wells Fargo, which called the allegations against him as “deeply disturbing”.

Delhi police has lodged an FIR against Mishra under Sections 354 (molestation), 354 (A), 509 (insulting a woman’s modesty), 510 (misconduct in public by a drunken person), 294 (using obscene words) of the IPC and section 23 of the Aircraft Act for peeing on the woman in the business class of the flight.

The prosecution opposed bail plea by Mishra, saying he was highly influential person. The complainant supported the prosecution, alleging the father of the accused had tried to contact her. Her counsel said the FIR in the case was lodged only recently though the complaint was made on November 28, 2022 after the incident.

The counsel for the accused submitted that the crew on board of Air India flight had woken him up and informed him about the alleged incident and suggested that he had been the perpetrator of the said act.

The applicant had then protested the imputation. However, considering the fact that alleged incident happened with a senior citizen and to alleviate the situation, the accused tendered unconditional apology to the complainant and even promised to compensate her. The complainant also accepted his apology at that time and the applicant/ accused considered that the matter has been settled. However, the complainant has now changed her stance and the present FIR has been filed. It has been stressed that the alleged act, although obscene, cannot come under purview of Section 354 of the IPC, Mishra's counsel.