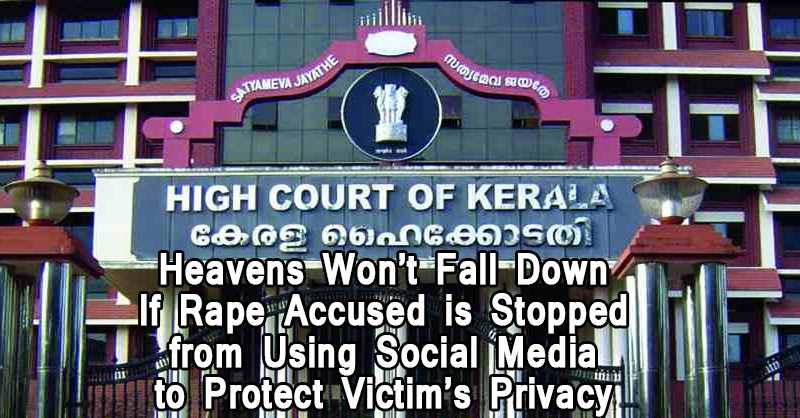 A bench of the Kerala High Court was presiding on a matter regarding the crime of rape. The single bench comprised of Hon’ble Justice P.V. Kunhikrishnan who was hearing the bail application of the petitioner, Muhammed Shifas. The petitioner in the matter was an accused in Crime No. 1017/2020 of Njarackal Police Station.

While presiding over the current matter, Justice Kunhikrishnan stated that “heavens will not fall down if a condition is imposed in a bail order restraining the accused in a rape case in using social media, especially when it is to protect the victim girl’s privacy”.

The petitioner allegedly also took photos of the victim in comprising positions. After taking the photos, the victim alleged that she was threatened by the petitioner. He told her that if she narrated the incident to anyone, he would leak these photos on social media. After he showed the photos to the victim, he allegedly committed rape on the victim on six separate occasions.

The petitioner has also been alleged to create a fake Facebook account by the name “Rilsila Richus”. Using this face account, he posted the pictures of the victim and blackmailed the victim for IND 1 lakh. He stated that he would delete the photos after the payment of the sum.

The petitioner was awarded bail on executing a bond of Rs 50,000 with two solvent sureties.