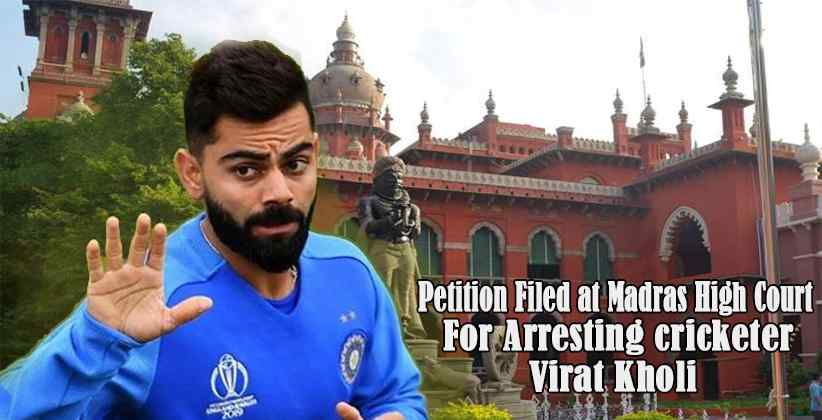 On 30th July, a petition for arresting cricketer Virat Kholi along with actor Tamannah was filed in the Madras High Court.The petitioner is a Chennai based lawyer, prayed before the court to issue a writ of mandamus or any writ directing the respondents to close all the gambling online sites and arrest the offenders to promote such evil illegal gambling. The petition claims that there is a spurt in the suicide of youngsters in Tamilnadu due to the huge monetary loss sustained by them in online gambling.

Youngsters are getting hooked/addicted to this gambling. They borrow loans from money lenders to gamble and when they are unable to repay the loan they commit suicide. The plea filed has sought the direction from the high court to ban all he online gambling apps as it is a menace to the society.

The petitioner compared this gambling to the blue whale game and said the Madurai division bench suo moto cognizance of the same and banned the game in India and further directed the authorities to initiate necessary legal action to stop this. He mentioned that this gambling is a violation of Article 21 of the constitution as it infringes on the right to life.

The petitioner then referred a case of a 19-year-old young boy named Vignesh who was a college-going student has committed suicide on 28th July by hanging himself and leaving behind a suicide note, blaming his addiction for online gambling.

The petitioner told IANS ‘They are the major influencing factor. Gambling is evil and they are promoting it. As a matter of fact, the amended Consumer Protection Act has a provision that are false advertisements the brand ambassadors are responsible for.’ According to him, the brand ambassadors cannot wash away their hands saying that they are just paid performer- just like an arrow while the archer is the wrongdoer. In his petition, he has mentioned that gambling is more dangerous than the blue whale game as by getting addicted to it the victim not only spends his money but also spends family’s money end leave them in a financial burden while in blue whale game the victim alone suffers.