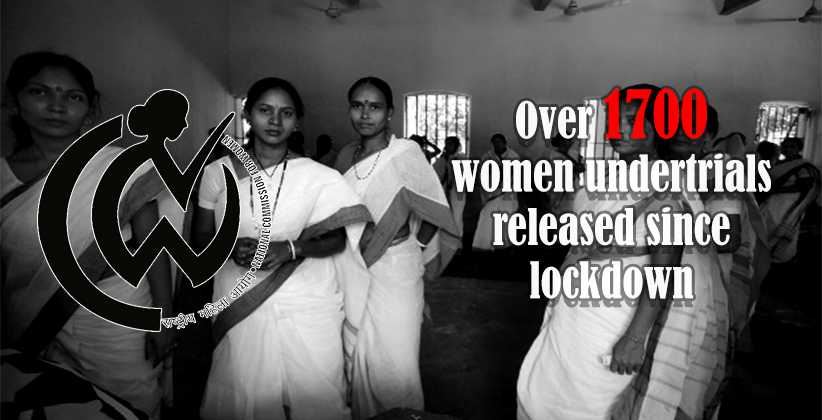 On Monday i.e. 10th May 2020, the National Commission for women said that over 1700 women undertrials have been given parole by seven states since the lockdown was announced to ensure social distancing in the jails.

On April 22, the National Commission for Women directed the states to implement safety measures for the women during the COVID-19 pandemic. The NCW had also directed the prison authorities from 25 states to participate in a review which was scheduled for Monday, to take account of reform measures for women inmates.

Chhattisgarh with 107 undertrials, Gujarat with 102, West Bengal with 93 undertrials followed by Delhi (73), Telangana (61), Manipur (4) were the other states who initiated parole for women inmates.

The NCW said that no one from women’s prison wards and barracks has yet tested positive for the COVID-19.

NCW Chairperson, Rekha Sharma said that the virtual meeting was attended by many states and it was noted that some jails had pregnant women too. Haryana recorded the highest number of pregnant women in jails and Bihar recorded three such cases. She further ensured that “they (pregnant inmates) will be taken care of”.

Most of the states reported 50-80% occupancy after the authorities gave bail to the undertrials women. Rekha Sharma said Karnataka was giving jobs to women who had finished their jail terms or were on Parole at a Patrol pump, run wholly by them while such prisoners in the state of Kerala had successfully manufactured nearly 500 liters of Sanitizers amid lockdown.

It was urged that jail authorities encourage and support the video conferencing of the prisoner with their family member to ensure the mental well-being and strength of the prisoners.

To this, the NCW stated that as per reports, the state of Tamil Nadu has made a total of 2900 video calls and other states were advised to advertise E-Mulaqat on a bigger scale.

The women’s agency also said that a meritorious job is done by the state of Kerala, where 10,000 prisoners both male and female were presented before the court for their Parole Proceedings.

The women’s agency in a letter dated 22nd April 2020 to the Director-General and Inspector General of Prisons in states suggested to decongest jails under the lockdown period and women undertrials even in non-bailable offenses must be given bail application under Section 437(I)(ii) of CrPC.

Services of the respective State or District Legal Services Authority such as SLSA or DLSA should be provided to women so that they can place the application of the inmates before the Court.

The recommendations also stipulate a provision for medical check-ups and arranging for services of specialists on visit-basis in the prison, as needed.