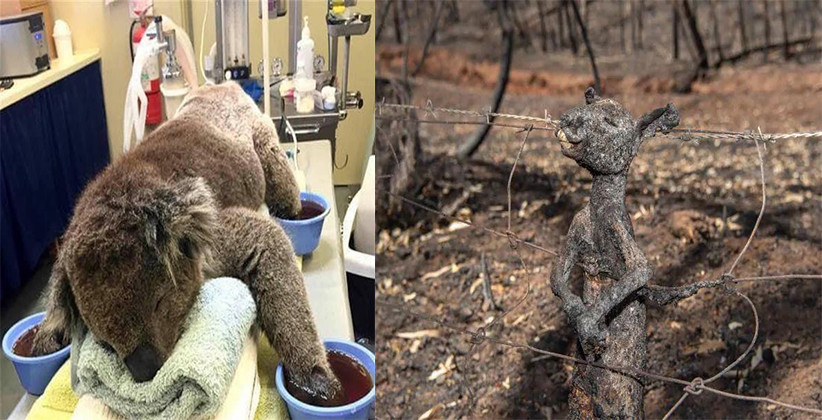 Environment Jan 06, 2020 Editor: Kshipra Srivastava 43 Shares
43 Shares
Southeast Australian skies turned crimson on Sunday (January 05, 2020) as animals and residents alike, sought refuge from the deadly bushfires burning 5 million hectares of land. 500 million animals have died causing a permanent loss of 30 rare species of animals in the continent which has been facing extreme weather conditions due to global warming.Temperatures as high as 50 degree Celsius have been measured last month making it the driest and the hottest season in history. Plants and trees easily catch fire in such hot and dry weather conditions leading to bushfires in Australia. The PM has announced a relief fund budget of 2 billion Australian dollars towards recovery. A senior fire-fighter has described the last 24 hours as one of the worst fires in the history of bushfires in Australia, he has ever encountered in his life. An eerie, smoke-filled landscape with deserted streets was photographed in Pambula, New South Wales while heart-rending images of animals like baby kangaroos and koalas, burnt and turned to ash, have gone viral over the internet.About 30 kms south, blood red skies loomed over the town of Eden. There, hundreds of residents were seeking shelter on the beach on police advice, as reported by an Eden resident. Destruction of houses, trees have occurred in large scale. A total of 146 fires were recorded across the state. Out of them, 65 could not be contained according to NSWRFS (NSW Rural Fire Services). Reportedly, 2700 fire-fighters were handling the situation. ‘Conditions have eased today and firefighters have gained the upper hand on several dangerous fires. There are no total fire bans in place for Monday,’ the NSWRFS posted on Twitter. Several properties were lost across NSW on Saturday (January 4, 2020). Several people including a 47 year old man died from cardiac arrest while fighting a fire threatening his friend’s house in Batlow. 4 firefighters were also injured due to smoke inhalation, heat exhaustion and hand burns. Flights were also cancelled from Canberra on Sunday to smoke and hazardous weather conditions. An airline passenger spotted huge clouds caused by the fires over NSW during a flight from Sydney to Melbourne on Sunday. They are pyro cumulonimbus clouds which are fire-induced explosive thunderstorms. They are formed when hot air rises from a ground based fire forming a cloud which eventually turns into a storm, according to CNN meteorologists. Author: Swetalana Rout