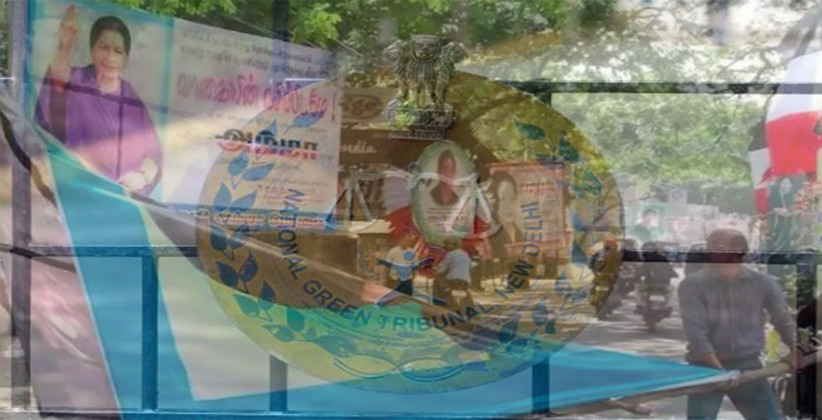 A plea is recently filed in the National Green Tribunal (NGT) seeking ban on polyvinyl chloride (PVC) hoardings, banners and flexes during elections.

A Bench headed by NGT Chairperson Justice Adarsh Kumar Goel while hearing the plea has asked the Election Commission, the Central Pollution Control Board (CPCB) and the Union Environment Ministry to convene a meeting and consider whether such campaigning material can be banned.

“…while it may not be necessary for the tribunal to go into the merits at this stage, the matter may first be considered in a joint meeting of representatives of ECI, CPCB and Ministry of Environment, Forests and Climate Change at the earliest,” the Bench said.

The petition moved by advocate and environmentalist W. Edwin Wilson has contended that the campaigning material made of plastic, used during elections are discarded as waste, while adversely affecting the environment.

“The polyvinyl chloride [PVC] is one of the most widely used plastics worldwide. A major problem in the recycling of PVC is the high chlorine content in raw PVC and high levels of hazardous additives added to the polymer to achieve the desired material quality,” the petition reads.

Further, the petitioner also sought directions to State governments to submit a plan of action for each State for assuring that no products made of PVC are used for campaigning purposes.

The petitioner informed the Bench that a letter was sent to MoEF&CC Secretary seeking directions to all State governments and the Election Commission for imposing complete ban on the use of PVC hoardings, banners and flexes during campaigning. However, no response was received from the Ministry.

Taking into consideration the contentions raised by the petitioner, the Bench said that “According to the applicant grant of above prayer is necessary on “Precautionary Principle,” in the interest of the environment. The applicant has relied upon studies indicating adverse impact of PVC on the environment and human health.”

With this view, the Tribunal disposed of the petition stating that the apex pollution monitoring body will be the nodal agency for coordination and compliance of the order.