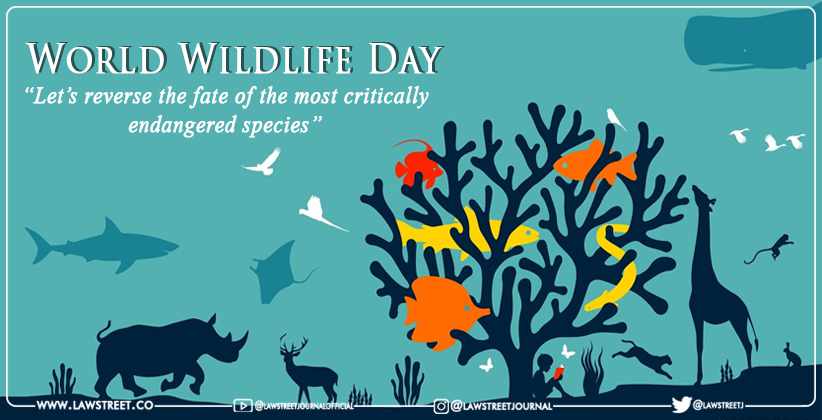 On 20 December 2013, at its 68th session, the United Nations General Assembly proclaimed 3 March – ‘the day of signature of the Convention on International Trade in Endangered Species of Wild Fauna and Flora (CITES)’ in 1973 – as UN World Wildlife Day. The United Nations World Wildlife Day aims at celebrating and raising awareness of the World’s wild animals and plants. It is the most important Global Annual Event dedicated towards wildlife.

The United Nations General Assembly resolution also designated the Convention on International Trade in Endangered Species of Wild Fauna and Flora (CITES) Secretariat, as the facilitator for the global observance of this special day for wildlife on the United Nations calendar.

World Wildlife Day (WWD) will be celebrated in 2022 under the theme “Recovering key species for ecosystem restoration”.

The main Aim of this year’s celebration will be to highlight the protection of some critically endangered species of wild life flora and fauna, and to drive discussions to enable solutions towards their preservation and conservation.

All conversations will be inspired by and seek to inform efforts towards the achievement of UN Sustainable Development Goals namely, 1 (No Poverty), 2 (Zero hunger) 12 (Ensure sustainable consumption and production patterns), 13 (Climate Action) 14 (Life below Water) and 15 (Life on Land).

Reports from the International Union for Conservation of Nature (IUCN) Red List of Threatened Species suggest that over 8,400 species of wild fauna and flora are critically endangered, while close to 30,000 more are understood to be endangered or vulnerable.

Based on the same estimates, it is suggested that over a million species are threatened with extinction. Mankind relies on wildlife and biodiversity-based resources to meet all their needs, from food, to fuel, medicines, housing, and clothing.

Millions of people also rely on nature as the source of their livelihoods and economic opportunities. In 2022, World Wildlife Day will therefore drive the debate towards the imperative need to reverse the fate of the most critically endangered species, to support the restoration of their habitats and ecosystems and to promote their sustainable use by humanity.