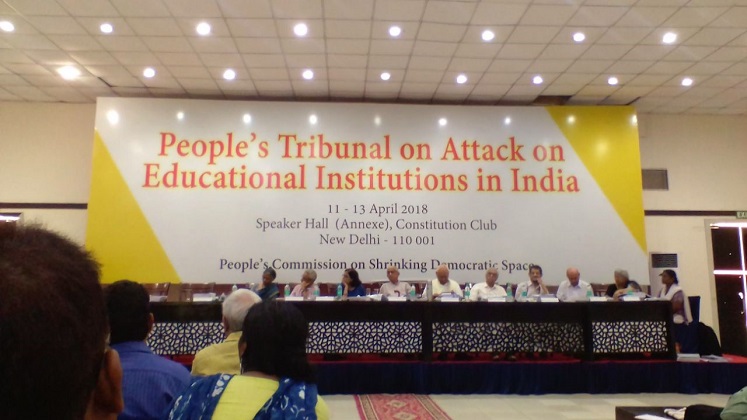 People's Tribunal on Attack on Educational Institutions in India organized a three-day seminar concluding on April 13, 2018, at Constitution Club, New Delhi. Students, teachers and other stakeholders deposed before the jury panel on various subjects of relevance such as impacts of privatization and globalization on educational institutions; distortion of history and syllabus by saffronisation of education; marginalization based on caste, gender and religion in educational institutions; crackdown on dissent and forming unions, etc. Prominent among the panel of jury were Justice AP Shah, Justice Kolsi Patil, Justice Hosbet Suresh and Prof. Romila Thapar, etc; besides a large number of participants from socially active groups.

During the deliberations, the speakers emphasized that one of the primary purposes of education has been the creation of active citizenry. This requires inculcating ethos of critical thinking and creativity, to reflect on real-life challenges and opportunities. It is in this context that educational institutions have always provided space for the right to freedom of opinion, expression, association, assembly, and dissent within their structures. These are also the values that are upheld and guaranteed by the Constitution of India.

Today, the reform and rectification of the inconsistencies and deficiencies of the existing public education system is used as a smokescreen to further saffronisation, homogenization, and corporatization, and pushing aside the primary purpose of education from free, rational and critical thinking.

In any democratic and civilized society, the university is a repository of young and budding intellectual opinion, more often than not also being the bedrock of voices of sharp critical dissent. In an age of homogenization and majoritarianism, student's movements who provide a voice of dissent are not only being targeted and criminalized but also being discredited and maligned, with a view to influence public perception and to quell any opposition to state action and policies.

Today, we see that the State has left no stone unturned in silencing voices of dissent and creating a negative perception of the students' movements by spreading false propaganda through the corporate media.

Students' movements continue to play an important role in the Indian democracy, questioning and critiquing anti-people government policies and state action, and constitute a formidable and necessary voice of dissent and opposition, outside the realm of parliamentary democracy. It accordingly comes as no surprise that they are subject to interference, repression and State action from the ruling governments.

The current scenario is that during the past thirty months or so, under the new political dispensation at the Centre, a peculiar attack on the Indian educational campuses has been underway. Those universities that came into being through statutes that ensured not just their autonomy but also their being embodied - in theory, and in practice with the constitutional values and vision where equality and non-discrimination were key, have been subject to such attack. These universities over a period of time were exercising the vision of equity and non-discrimination with the gradual implementation of affirmative action to ensure that students from rural, marginalized and discriminated against backgrounds made it to the institutions of higher learning. However, the dual assault of aggressive neo-liberal policies- that have ensured a cut in scholarships in institutions of learning, accompanied by an ideological assault of an authoritarian character, have rendered campuses in India today the focal points of a resurgent democratic movement with student leaders and student associations who do not fall in line with majoritarian vision.

On the other hand, the neo-liberal policies and privatization of education by the State is making it impossible for Dalits and other deprived sections to enter into higher education, on the other hand, those who are able to make it are being targeted & attempts are made to silence them.

Today the government is engaged in constant attacks on students, teachers, employees, intellectuals, university autonomy and academic freedom across India. Aggressively pursuing its right-wing authoritarian agenda, it has attacked democratic voices from India's educational institutes, including by using the criminal mechanism to file fabricated cases. The recent events that have unfolded under the new regime, clearly indicate the state's intention to destroy premier centres of higher education to thwart intellectual, political oppositions.

The government at the Centre imposed its loyalists on institutions like Indian Council of Historical Research (ICHR) and Film & Television Institute of India (FTII). The government is giving a free hand to right-wing ideology by suppressing alternative politics at campuses like Hyderabad Central University (HCU), Jawaharlal Nehru University (JNU), Delhi University (DU), Jadavpur University (JU), Allahabad University and Tata Institute of Social Sciences, Mumbai (TISS). While the government tried to brand both JNU & HCU as "anti-national," the recent MHRD rankings had recognized them amongst the top 4 veracities of India.

Given the current scenario and the increasing attacks on educational institutions in India, People's Commission on Shrinking Democratic Space (PCSDS) through its Permanent People's Tribunal on Shrinking Democratic Space (PPTSDS) decided to organize this seminar, 'People's Tribunal on Attack on Educational Institutions in India.'