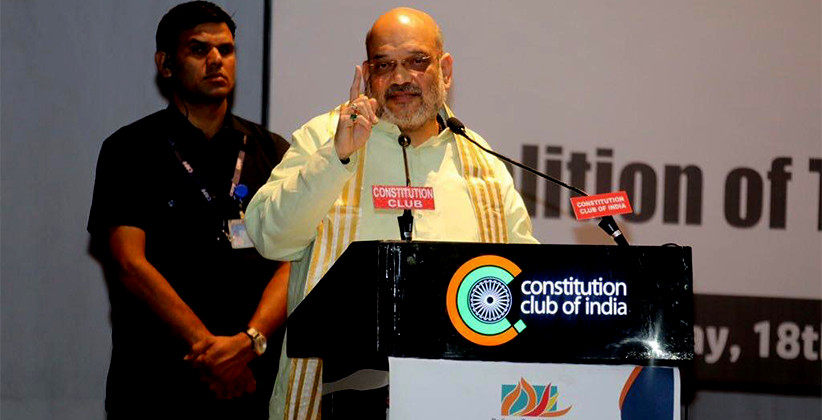 Union Home Minister Amit Shah on August 18, 2019, has accused Congress of dissenting against the newly-enacted law on Triple Talaq to keep their vote bank intact.

Addressing an event on "Abolition of Triple Talaq: Correcting a Historic Wrong" in Delhi, Shah said that "Congress has no shame. They say that they are in favour of triple talaq and it should persist. They do not have the justification for their stand and always argue in order to register their protest so as to keep their vote bank intact.”

The top BJP leader said that the politics of appeasement and vote bank politics are the prime reason the malpractice sustained for years.

"On 23 April 1985, the Supreme Court gave an order in favour of Shah Bano. The top court abolished triple talaq and said that giving maintenance was mandatory and a reason must be given for the talaq. But, Rajiv Gandhi under pressure from orthodox Muslims and vote bank brought a law overturning the court's decision," he asserted, adding that it will remain imprinted as a "black day" in the history of Parliament.

Further, dissenting the political party, Shah said that the Congress did not have the courage to end the malpractice.

"Triple talaq was malpractice. There is no doubt about it in anybody's mind. Some parties opposed the bill in Parliament but deep inside their heart they knew it was a malpractice that needed to end but they did not have the courage to do it," he said.

Shah said that according to the survey conducted by the Narendra Modi-led government, 92.1 per cent of the women wanted freedom from this malpractice.

"As many as 18 countries across the world have banned it. If this was a part of Islam, why would these Islamic countries do away with it," he asked.

On August 1, 2019, President Ram Nath Kovind gave his assent to the Muslim Women (Protection of Rights on Marriage), Bill, 2019, which makes declaration of talaq a cognizable offence, attracting up to three years’ imprisonment with a fine.