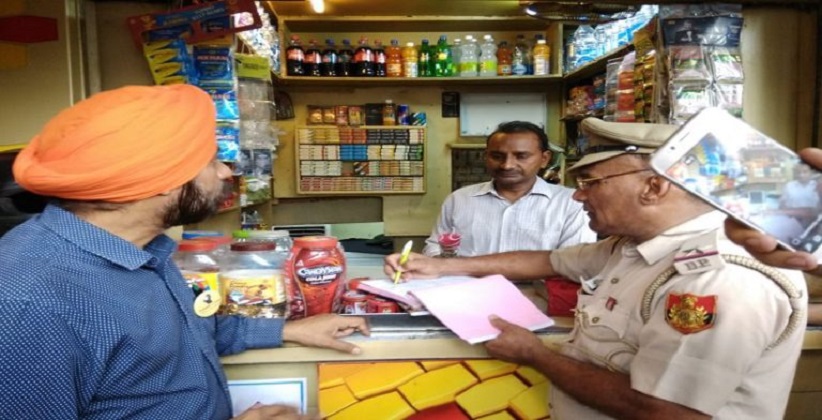 Aam Aadmi Party (AAP) MLA from Hari Nagar, Jagdeep Singh joined the ‘Pledge for Life’ campaign, which aims at protecting youth and non-smokers. During COTPA (Cigarettes & other Tobacco Products Act, 2003) drive by Delhi Police in his constituency, he personally made people aware about ill-effects of tobacco.
A large number of supporters were with Jagdeep Singh during this drive. Advertisement and hoardings of tobacco products, which were a violation as per COTPA, were also removed by the vendors at various tobacco outlets.

In June last week, AAP MLAs came on roads to show their commitment to tobacco control. In a first of its kind initiative in the country, MLAs, Sambandh Health Foundation (SHF), Max India Foundation and Delhi Police did a joint campaign on enforcement of COTPA.
MLA also told users to quit tobacco while Police was penalizing violators under COTPA during an enforcement drive. Tobacco vendors were also appealed by the MLAs to comply with the provisions of COTPA.

MLA Jagdeep Singh said, “Vendors should not be selling tobacco products to minors and if they do, they must be penalized as prescribed under the law.” As per the Global Adult Tobacco Survey 2016-17, more than 25 lac people in Delhi use tobacco in form of smoking and chewing. In Delhi, more than 10,000 users die annually due to diseases attributed to tobacco while 81 children initiate tobacco use every day.

Senior Project Manager of Sambandh Health Foundation (SHF) Dr. Somil Rastogi said, “As per Global Adult Tobacco Survey (GATS) 2016-17, tobacco Smoking (11.3%) is more prevalent in Delhi than chewing (8.8%). In Delhi, Bidi is the most commonly used tobacco product (8.2%) followed by cigarettes and Khaini which are 4.9% each. The mean age of initiation of tobacco use in Delhi is 18.3 years which has come down over last 6-7 years. Shockingly 28% of adults get exposed to passive smoking in public places while 20% get exposed at workplaces. Passive smoking is equally dangerous for non-smokers as smoking to smoker himself. Section 4 of COTPA prohibits smoking in public places which target to protect non-smokers from exposure to passive smoking.

Dr. Harit Chaturvedi, Chairman Max Oncology, and Voice of Tobacco Victims (VoTV) patron said, "It’s a great initiative by Public Representatives for a social cause which is one of its kind in India to protect our young generations. Delhi Police on COTPA enforcement is doing a commendable job. All these collaborative efforts will lead towards a positive ''social behaviour.”

Taking tobacco control measures further, the MLAs will be meeting students and teachers in schools on a one-to-one basis in the second phase of the campaign to make them aware of hazards of tobacco consumption.