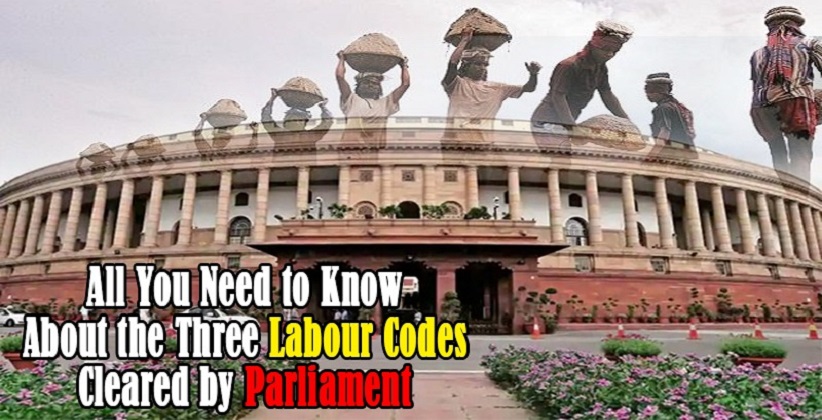 Three labour codes introduced by Labour Minister Santosh Kumar Gangwar were passed by the Rajya Sabha and Lok Sabha. These codes comprise a part of the four codes that are included in the 29 Central Labour Laws.

Opposition Congress leaders Manish Tewari and Shashi Tharoor openly opposed these bills. Their reasoning was that bills introduced in 2019 were “published for public consultations.” These bills were withdrawn by the government and “moved the fundamentally changed 2020 Bills, without further consultation.” They also said that the Codes were not ‘pro-labor’ and were a ‘blow’ to the rights of the workers.

The salient features of these three Codes are explained below:

This bill gives power to the state government from exemption of new factories from the provisions laid down in the code. The objective behind this is to accelerate economic activity and employment.

“The Bill defines factory and any premises where the manufacturing process is carried out and it employs more than:

It also restricts contract labor employment for core activities, except in the following cases:

It has specified 8 hours in a day to be the daily work hour limit.

According to the Bill, all industrial establishment with 300 workers or more have to draft standing orders regarding the matters that are enlisted in a Schedule to the Code, such

The new bill has altered the earlier provision which stated that “where once an establishment is covered under the provisions related to standing orders, these provisions continued to apply even if its employee’s strength reduced below the threshold (100 workers) at any time thereafter”.

It also provided that any establishment which has at 300 workers is mandated to take prior permission of the government before they commit the acts of closure, lay-off, or retrenchment.

The 2020 Bill has amended the definitions of some terms in the Code. Some of these important amendments are enumerated below:

The Bill also provides that the central government is empowered to apply the Code to any establishment through the way of notice.