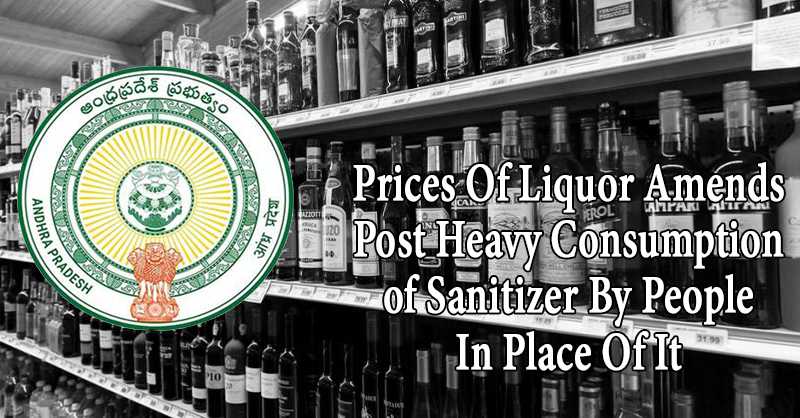 Recently, there have been ample reports of people dying due to the consumption of sanitizer in place of liquor. The Andhra government has brought some changes in the prices of liquor in order to tackle the appalling situation of people.

As per the government order, the prices of liquor were changed on 3rd September, Thursday, and the changes are made in the following ways, liquor whose existing price is less than Rs 150 is reduced, whereas the prices of liquor more than Rs 190 have been increased. The rate of Beer and Ready to Drink (RTD) is also reduced by Rs 30. But the changes are made in such a manner that there is still an overall rise in the MRPs at 75%.

The Special Chief Secretary of the Revenue (excise) Department, Rajat Bhargava has stated that there was a need of rationalization of liquor prices as there were numerous incidences which came into view where people had died due to the consumption of sanitizers.

He explicitly mentioned, “there is an imperative need for rationalization of rates charged on the liquor, beer, and RTD to execute the objectives of reducing the consumption of liquor in Andhra Pradesh. At the same time, it is also necessary to avoid inter-state smuggling of liquor into the state and put halt to the consumption of sanitizers leading to the death of people. The department has rationalized the prices downwards of the lower category liquor prices and slightly increased the prices of liquor of higher category keeping the overall increase of MRPs at 75%.”

He further added that “Therefore, it is definite to rationalize the price per bottle on the issue price of Indian Made Foreign Liquor (IMFL), Foreign Liquor, Beer, Wine and Ready to Drink supplied by the Wholesale IMFL depots to the retail licensee of the Shop, Bar, and In-house.”

The state government has barred the manufacturing of country-made liquor and even made it a punishable offense. In this hassle, poor people had no other option but to resort to any other alternative way to quench their urge for liquor. In return, they started consuming sanitizer as it has high alcohol content. But the consumption led to the death of many people in Andhra Pradesh in the past few months.