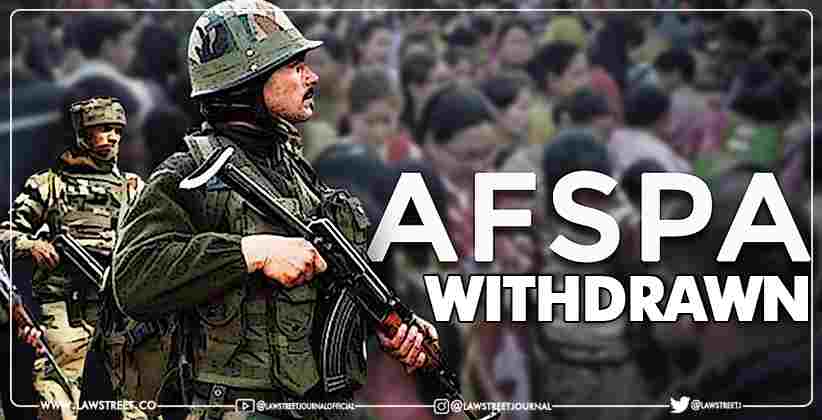 The AFSPA (Armed Forces Special Power Act), 1958, got withdrawn from large parts of Nagaland, Assam, Manipur after decades. The AFSPA allows security forces to conduct operations and arrest anyone without any prior warrant besides giving immunity from arrest and prosecution to the security forces if they shoot someone dead. These powers have been conferred to Army personals in order to combat any insurgency or related issues faced by them in National Security concerns.  There have been repeated protests for the complete withdrawal of AFSPA from the Northeast as well as Jammu and Kashmir for its alleged “draconian” provisions.

In December 2021, 14 civilians had been killed by the army in a case of “mistaken identity”.

The decision was taken three months after the Central Government constituted a High-Level Committee in order to examine the possibility of withdrawing the AFSPA, in Nagaland. The central government accepted the recommendation of this Committee towards the withdrawal of AFSPA in a phase wise manner. The disturbed area notification got withdrawn from 15 police stations in 7 districts in Nagaland.

The AFSPA, 1958 has been in force in these states for several decades now, to assist the armed forces operating there to tackle insurgency.

The home minister attributed this revocation to the improved security situation and fast-tracked development made by the Modi Government.

A Home Ministry Spokesperson clarified that the AFSPA has not been completely withdrawn from the three insurgency-hit states and will continue to exist in partial force.

A series of tweets by shared by Amit Shah.   One of the tweets read. “In a significant step, GoI (Government of India) under the decisive leadership of PM Shri @NarendraModi Ji has decided to reduce disturbed areas under Armed Forces Special Powers Act (AFSPA) in the states of Nagaland, Assam and Manipur after decades.”

“Thanks to PM @NarendraModi Ji’s unwavering commitment, our North-Eastern region, which was neglected for decades is now witnessing a new era of peace, prosperity and unprecedented development. I congratulate the people of North East on this momentous occasion,” read another tweet of Amit Shah.

Due to the significant improvement in the situation, the AFSPA is being removed with effect from April 1 completely from 23 districts and partially from one district of Assam.

The disturbed area declaration is in force in entire Manipur (except Imphal municipality area) since 2004. With Thursday’s decision, 15 police station areas of 6 districts of Manipur will be excluded from the disturbed area notification with effect from April 1.

Tension started to rise in Nagaland when fourteen civilians got killed by the army due to mistaken identity. This was followed by mass agitation and social unrest that continued for weeks thereafter.   Manipur Chief Minister N Biren Singh had also expressed his concern over the same and said that the security agencies have to look into the issue of National Security.

A home ministry spokesperson reported that there has been a reduction of 74 per cent militancy incidents from 2014 to 2021 in the Northeast. Moreover the deaths of security personnel and civilians have also come down by 60 per cent and 84 per cent respectively during the same tenure. It was told that the Home Minister has held a dialogue with all the states of the region on a continuous basis.

Should Special Marriage Act Provisions Be Followed By The Arya Samaj Temples While Solemnising Marriages? Supreme Court To Consider