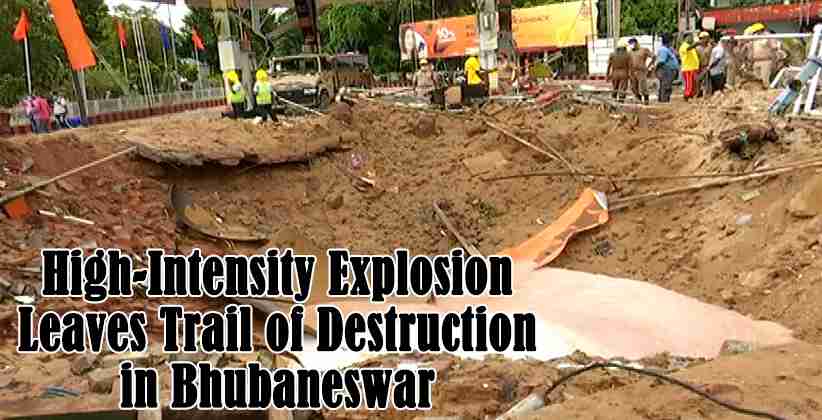 The explosion at a petrol pump near Raj Bhavan square in the capital city of Odisha on Wednesday (7 October 2020) afternoon not only injured many but also left a trail of destruction in the vicinity as far as a few hundreds of feet away.

As per official sources, as many as 9 persons suffered injuries at the explosion site. All of them were rushed to Capital Hospital while two of them were shifted to Cuttack SCB Hospital due to their critical condition.

Bibhuti Nayak of Cuttack SCB Plastic Surgery department said, “While one has sustained 60% burns, the other has suffered 40%. Both have sustained grievous head injuries and experts from multiple departments are engaged in their treatment.”

Local residents narrated their horrific experience of how a deafening sound followed by a fire-spitting high into the sky from the filling station damaged several houses, vehicles and also injured many.

As per eyewitnesses account, the blast left a gory scene with mutilated body parts including limbs, hand, ear, and fingers found strewn around the spot following the blast. The blast was so severe that a mechanical electric motor used in the petrol pump and weighing around 20 kgs was found lying a few hundred feet away from the site of the blast.

Special secretary of the Home Department, Santosh Bala’s residence was one of the buildings which suffered extensive damage in the incident.

Union Petroleum Minister Dharmendra Pradhan has ordered a probe into the fire mishap triggered by an explosion at a filling station near Raj Bhawan in Bhubaneswar on Wednesday. Taking to Twitter, Pradhan said, “After learning about the mishap, I have directed the secretary of the petroleum and the natural gas department to inquire into it.”

The Union Minister also held a discussion with senior officials of the Odisha government and Indian Oil Corporation Ltd. and instructed them to submit the probe report at the earliest. Pradhan also wished a speedy recovery for those injured in the mishap.

Bhubaneswar Deputy Commissioner of Police (DCP) Uma Shankar Das said no casualty has been reported in the mishap so far. “Reason behind the fire is yet to be ascertained. The road connecting AG square to Governor House has been sealed while locals have been asked not to venture out of their houses,” he added.

Meanwhile, Chief Minister Naveen Patnaik has announced free medical treatment of people injured in the fire accident at the petrol pump and wished their speedy recovery.