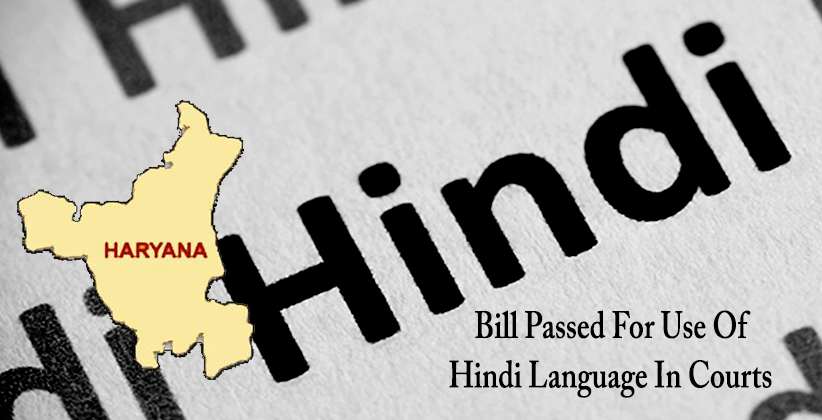 Haryana: The Haryana Cabinet approved introduction of Hindi in subordinate courts in the state. The Vidhan Sabha passed a Bill to pave way for implementation of the decision. As per the Haryana Official Language (Amendment) Bill, 2020, the work will be done in Hindi in all civil and criminal courts in Haryana which are subordinate to the Punjab and Haryana High Court and also in all revenue courts and rent tribunals or any other court or tribunal constituted by the state government. The Bill states that the state government will provide the requisite infrastructure and training of staff within six months of the commencement of the Haryana Official Language (Amendment) Act, 2020.

78 MLAs, Advocate General and hundreds of advocates, had expressed their interest to get Hindi language authorized for use in the courts so that the citizens of Haryana can understand the entire justice process in their own language and can easily put their views before the Courts.

The Chief Minister in his statement made in the assembly said "To spread the propagation of Hindi as the language of the people of the state, it is necessary that this language should be used in our day to day work. The purpose of justice in a democracy is that the plaintiff should get justice quickly in his own language and should not remain speechless during the proceedings".

Haryana was separated from Punjab on linguistic basis in 1966. The major language was Hindi in Haryana, therefore, in 1969 Hindi was declared as the official state language.

On the other hand, Punjab then amended the law to introduce Punjabi in all civil courts and criminal courts, subordinate to the High Court of Punjab and Haryana and all revenue courts and tribunals, However, Haryana had not done so.

The Chief Minister said that they have presented the Bill after due consideration adding that Uttar Pradesh had introduced such system many years back.