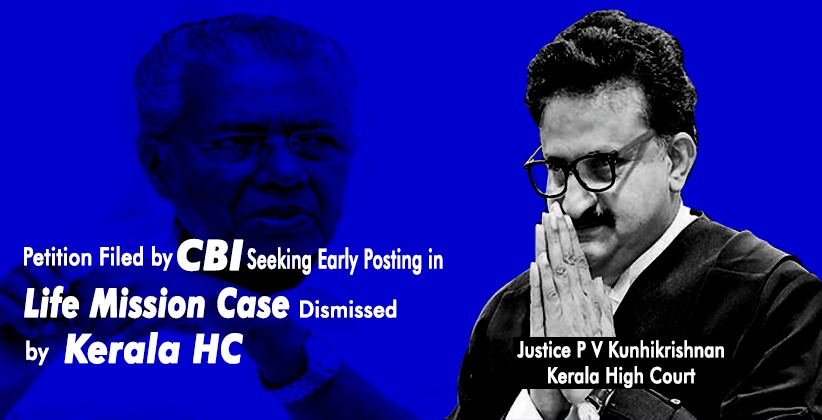 Earlier, several petitions were filed to quash the FIR registered by CBI on a complaint made by Anil Akkara, Congress MLA, alleging violations of the Foreign Contributions Regulation Act, 2010 over the receipt of contributions from the UAE for the construction of apartments for flood-victims under the Kerala Government's LIFE Mission project.

A bench of Justice P V Kunhikrishnan took up the petition on Tuesday, 20th October, and asked the Counsel representing CBI whether he is ready to argue the matter today.

On this, the counsel submitted that “he wants to file a counter affidavit in this case and he also wants to get the date of the Additional Solicitor General of India who will argue this matter.”

K V Vishwanathan, Senior Counsel representing the State said that “the early posting petition was filed only to get the attention of the press.”

The court while dismissing the petition said that said “I do not want to make any observation about the same. It is a fact that no counter-affidavit is filed by the Central Bureau of Investigation in this case. They also admitted that they want to file a counter affidavit in this case. In such a situation, the early posting petition need not be considered at this stage. After filing the counter and after getting the convenient date of the learned Additional Solicitor General of India, the Central Bureau of Investigation can file a fresh petition for early posting of this case.”

The bench of Justice V G Arun stayed the investigation against the CEO of Life Mission Project last week, after observing that the provisions of the FCRA were not attracted against the government agency.