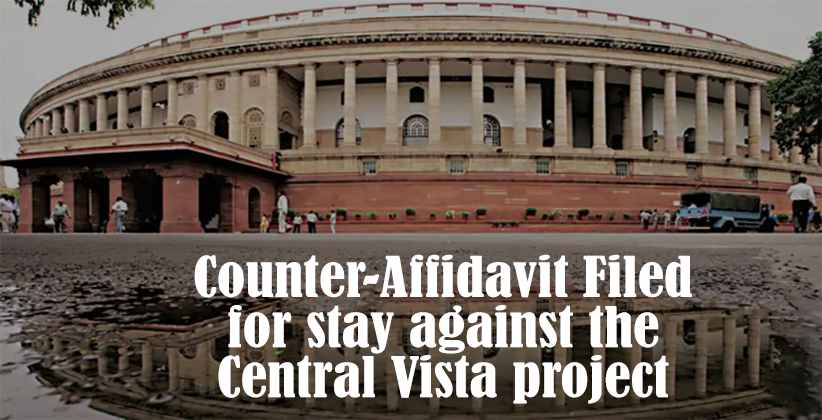 The center has filed a counter-affidavit for a stay against the Central Vista project which sets out to build a new Parliament and other Central Government offices in Lutyens Delhi.

The counter-affidavit submits that the Central Vista development/Redevelopment Plan was proposed for future needs of space for the Parliament, Ministries, and Departments, as well as to provide better facilities, amenities, parking facilities, citing fire safety, acoustics concern, the affidavit has referred to the dilapidated condition of the century-year old construction to shed a light on the need for the Redevelopment plan.

The 117-page affidavit filed by Executive Engineer of Central Public Works Department “...fire safety is a major concern as the building is not designed according to the present fire norms. There are several other safety issues also. The audio-visual system within the Parliament is old. The acoustics of the hall is not effective. The electrical, air-conditioning, and plumbing systems are inadequate, inefficient, costly to operate and maintain. Since the systems are mostly later additions and not a part of the original design, energy efficiency is also poor.”

As further stated in the affidavit that Lok Sabha seats will likely increase substantially after 2026, the affidavit stated that “packed to capacity and have to space for the addition of seats if the parliament is expanded. The seating arrangements are cramped and cumbersome, there are no desks beyond second now and movement is extremely constrained.”

The affidavit stated that it will “facilitate to keep and maintain the existing iconic building intact as a symbol of a vibrant democracy.”

The affidavit further said “The new parliament building to house our nation’s bicameral legislature with complete indigenous technology, knowledge, and expertise will be a showcase to the rest of the world. This building will be construed with enhanced structural life, which will last for centuries. Therefore, this project will become a symbol of national pride and inspire citizens to participate in the democratic traditions in India.”

The affidavit also rejects that the contention was not transparent and the meeting was held without members. It was further submitted that due to the pandemic a few members could not participate in the meeting. However, had there been any reservation on the no objection granted by the CVC, they were free to voice their dissent.

The counter submitted on 22nd April 2020 the recommendation by the Expert Appraisal Committee (EAC). On 17th June 2020 The Ministry of Environment, Forest and Climate Change (MoEF&CC) granted environmental clearance for the new parliament building with specific conditions.

It is to be noted that the environmental clearance is subject to the outcome of proceedings of the Special Leave Petition pending before the SC.

The petitioner wrongly alleged that the proposed expansion and modernization of the parliament building was “purposely managed in a manner so as to somehow circumvent existing regulations and do away with Public Consultation.”

The affidavit stated that the clearance granted by two independent agencies/authorities, and the “Approvals/No Objections” were granted only after detailed deliberations and after following the due process.

The affidavit also stated that no public consultation was required before the grant of environmental clearance as the project was under the B category as per the 2006 EIA notification.

On 17th July 2020, the SC directed respondents to file a reply to the plea challenging the land used for the Central Vista project. A bench headed by UU Lalit stated that it was not the time for formalities but to do something substantial. Senior Advocate Sanjay Hegde requested the issuance of notice in the plea.

The plea contends that the 20th March notification of the government supersedes a Public Notice issued by Delhi Government Authority (DDA) on 19th December 2019 is the subjugation of rule of law and judicial protocol.

The DDA has issued a public notice inviting objections against proposed changes in the use of land in December 2019.

The notification was challenged before Delhi HC being ultra vires under Section 11A of the Delhi Development Act, 1957, it was further stated that it was not according to the plan of Delhi 2020 (MPD2021) and in violation of “larger laws of the country.”

On 6th March 2020, the matter self-transferred to Justices AM Khanwilkar and Dinesh Maheshwari.

On 20th March 2020, the center notified changes in the land pertaining to approximately 86 acres of land in the heart of Lutyens Delhi marked by structures like Parliament, Rashtrapati Bhavan, India gate, north block and south block amongst others. The same petitioner then moved to the apex court with a fresh plea against the center’s notification.

The instant plea stated that it was in violation of citizen’s extended version of Right to Life guaranteed under Article 21. Calling it a bash move, the plea claims it would deny people from enjoying the highly treasured and open green spaces.

“(The notification) is violative of Article 21 of the Constitution of India and, violates the extended version of Article 21 the Right to life, guaranteed by the Constitution of India. That Respondent No. 1 brashly issued Notification No. SO 1192(E) dated 20th March 2020, changing land use, which will deprive residents of Delhi and citizens of India a vast chunk of highly treasured open and green space in the Central Vista area, available for public, semi-public, social and recreational activity, stands against Article 21, Right to life, the right to the enjoyment of wholesome life.”

The plea further states that it invokes Article 49 and is obligated to protect objects and places of national importance. Citing the Public Trust Doctrine, the plea urges that “upon the state to protect such resources for the use of the general public, rather than to permit it only for use of a certain class or section of the people.”

On 30th April the SC refused to stay the project and stated that “during the COVID-19 no one going to do anything”.

On 19th June 2020, the CG informed SC that it cannot assure that no work will be done on the ground with respect to the Central Vista Project, despite Hegde submitting that administrative clearances were being given, with no objections. The bench raised a question that whether the Apex Court could restrain the authorities from acting as per the law.

Lawyers Cannot Claim Any Legal Right To Use Local Trains To Travel To Court Or Offices: Maharashtra Gov. to Bombay HC