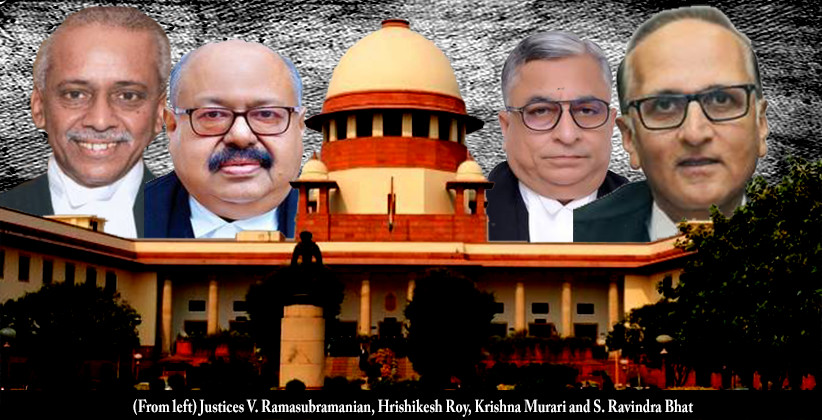 The President exercising his powers conferred by clause (2) of Article 124 of the Constitution of India on September 18, 2019, has notified the appointment of JusticesV. Ramasubramanian, Krishna Murari, S. Ravindra Bhat and Hrishikesh Roy as Supreme Court judges.

Justice V. Ramasubramanian was appointed as an additional judge of the Madras High Court in July 2006, and as a permanent judge in November 2009. He was transferred on his own request to the High Court of Judicature at Hyderabad with effect from April 27, 2016. After the bifurcation and the creation of a separate High Court for the State of Andhra Pradesh, he was retained as a Judge of the High Court of Telangana at Hyderabad w.e.f. January 1, 2019. He was sworn in as the Chief Justice of Himachal Pradesh High Court on June 22, 2019.

Justice Krishna Murari was appointed as an additional judge of the Allahabad High Court in January 2004 and as a permanent judge the following year. He took over as Chief Justice of the Punjab & Haryana High Court in June this year.

Justice S. Ravindra Bhat was appointed an Additional judge of Delhi High Court in 2004 and was made a permanent judge in 2006. He was made the Chief Justice of the Rajasthan High Court last April.

Justice Hrishikesh Roy was made an additional judge of the Gauhati High Court in 2006 and was made permanent in 2008. In 2018, he was appointed the Chief Justice of the Kerala High Court.