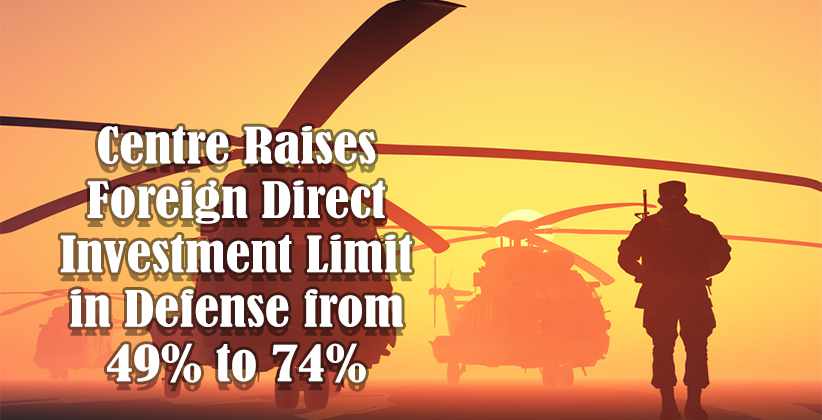 It was announced that the Union Government has decided to increase the Foreign Direct Investment (FDI) limit in Defense manufacturing under the automatic route from 49 percent to 74 percent. Sitharaman further announced that the central government will notify a list of weaponry and platforms banned for imports while including that such things can only be bought from India. ‘Make in India’ initiative promulgated by Prime Minister Narendra Modi is implemented while distributing the Economic Package.

Sitharaman said, “Make- In- India for self-reliance in defense production - we will notify a list of weapons and platforms for a ban on import with year-wise timelines. There will be indigenization of imported spares,” Other major steps included a ban on import of certain defense equipment and corporatization of Defense ordinance factories.

In line with the new reforms, the Government will allow the private sector to use facilities of ISRO and will provide predictable policy and regulatory environment. The private sector will be able to use these facilities for future projects for travel in outer space or exploration of new planets. The government will loosen geospatial data policy to make such remote- sensing data more widely available to tech entrepreneurs.

Sitharaman further said that there is a necessity to ease restrictions to make civilian flying faster and more efficient as only 60% of Indian airspace is freely available. The government will introduce Rs. 1000 crore per year which will save pilot and passenger travel time, aviation fuel and will have positive environmental benefits. Airports Authority of India (AAI) is auctioning six airports on the PPP basis. Additional investment by private players to be invited in 12 airports, which is expected to net Rs. 13,000 crores, for AAI.

Ordnance Factory Boards will be corporatized to improve professional management, transparency, and accountability. They will be listed on the Stock Market. They will not be privatized as this is not the same as privatization. FDI limit in defense manufacturing under the automatic route will be increased from 49% to 74%. Union Finance Minister further said, “There will be separate budget provision for domestic capital procurement. This will help reduce defense import bill and also encourage domestic manufacturing.”

Suspended Functioning of Courts subordinate to Delhi High Court to Extend till May 23rd, 2020 [READ ORDER]